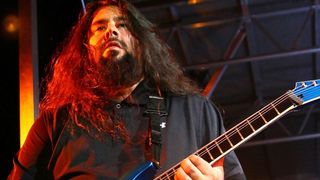 Stef Carpenter says that technology is to blame for people being too emotionally invested in what other people do.

The Deftones guitarist has dismissed the rumour that he could split from the band, following comments from frontman Chino Moreno that he was “the odd man out” in Gore studio sessions – and his own admission that he initially didn’t want to work on the record.

“People are too emotional about their lives. I see it in my lives and my friends’ lives, technology has given people so much information and it should have been something that freed us up and be more rational. Instead everyone is more emotional and stressed, and so heavily invested in the behaviour of other people.

“Remember before all this communication? When you didn’t have your friends and a bunch of strangers feed coming into your life and you could just enjoy your own life without hearing about all this stuff all the time?

“You just got on with your life and your problems and it was all fine. So people need to cool off. It has to be understood that it’s an awesome invention and it’s an awesome platform for people to be able to communicate. But, like everything, it’s just been saturated to the point where you can’t say anything without all this fallout.”

Gore is released on April 8. Deftones have begun a North American and European tour, which includes an appearance at this year’s Download festival at Donington in June.