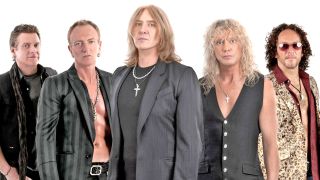 Def Leppard guitarist Vivian Campbell says the band are preparing something “unique” for January next year – but won’t reveal any details.

The mystery event will follow a hectic year that includes heavy touring and the launch of their 11th album.

Campbell tells Rock101: “We haven’t had a year like this since probably 2008. We’re going round the world, starting in Canada, then we go to Europe, then America, Japan – quite possibly Australia and New Zealand. And we’re going to the UK in December.”

He continues: “We’re going to do something that we’ve never done before, next January, that will be announced very soon. So it’s a busy time for us.”

The guitarist says of the follow-up to 2008’s Songs From The Sparkle Lounge: “We’re not in a hurry to release it. It won’t be out until the second half of the year – but it’ll definitely be released in 2015.”

He describes it as “the best record we’ve made in the 23 years I’ve been the Ronnie Wood of Def Leppard.” Referring to his recent battle with Hodgkin’s lymphoma, he says: “The bummer is I didn’t have a lot to do with the record. So I think that speaks volumes: they’re better off without me!”

Campbell adds of his health: “As far as I’m concerned, I’m over the hill and done with it – but you never know with these things.”

Def Lep frontman Joe Elliott was last year forced to cancel plans to produce Black Star Riders’ second album when his own band’s schedule became too busy. BSR guitarist recently Scott Gorham admitted they’d been “cheesed off” at first, but that the move turned out for the best.