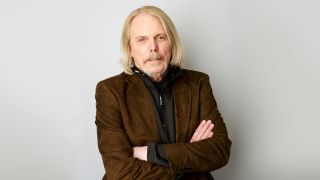 Scott Gorham admits Black Star Riders were “cheesed off” when Def Leppard frontman Joe Elliott had to bow out of producing second album The Killer Instinct.

But it meant they wound up working with Nick Raskulinecz instead – and the guitarist is delighted with the end result.

Thin Lizzy offshoot BSR are currently touring the UK with Europe in support of the follow-up to 2013 debut All Hell Breaks Loose.

Guitarist Gorham tells Classic Rock Revisited: “During the embryonic stage of the album Joe came to us. He said, ‘I would love to produce – I’ve got the studio, I’ve got the know-how and I’ve got the kick-ass engineer. What do you think?’

“We said, ‘That sounds great.’ We’ve all been friends with Joe for decades and we knew it would be a kick-ass situation.

“What happened is, the guy’s band – you may have heard of them – got the first record deal they’ve had in years. The company threw a boatload of cash at them and told them they needed a release by such-and-such a date. They needed to record in our timeframe.

“He couldn’t apologise enough, and we were a little cheesed off. What it did was pave the way for Raskulinecz, who was a killer find as a producer.”

Black Star Riders settled on their name after abandoning plans to record under the Thin Lizzy title, in deference to the memory of late mainman Phil Lynott.

Gorham reflects: “So many people thought it was a mystery why we’d do that. We walked away from a brand name. The record advances were easily twice as much as we got with Black Star Riders, for obvious reasons.”

But he adds: “In my mind, as well as everyone else’s in the band, it was the right thing to do.”

Def Lep recently completed work on the follow-up to 2008 album Songs From The Sparkle Lounge.