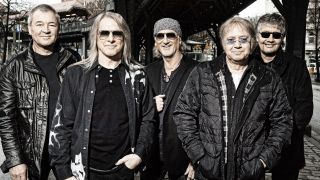 Deep Purple have shot down the idea of Ritchie Blackmore making a return appearance for a one-off reunion show.

The co-founding guitarist, who left the band in 1993, recently said he’d accept an invitation to stage a temporary comeback – but added: “I don’t believe Deep Purple would be interested.”

Now frontman Ian Gillan, bassist Roger Glover and drummer Ian Paice appear to have proved he was right, during a SiriusXM Town Hall show (via Blabbermouth).

Glover commented: “I don’t think he approves of me very much because of the remixes and remasters that I did of the older albums. That’s what I’ve heard anyway.”

Adding that he’d be “happy to talk” to Blackmore, although they hadn’t communicated in “twenty-odd years,” he said of a reunion: “You can never say never, but I would doubt it very much.”

Paice said he didn’t want anything to interfere with the camaraderie of the current lineup, which has featured Blackmore’s replacement Steve Morse since 1994.

“I enjoy going on stage every night knowing that I’m with my four friends,” the drummer reflected. “That wasn’t always the case – and I wouldn’t want to go back to that again.

“It’s just the way the man is. He’s a man of great emotions. He works it out in black and white. there’s no grey areas to Ritchie. ‘I will’ or ‘I won’t.’ ‘I like it’ or ‘I don’t like it.’ Sometimes your band members suffer from that.

“I want to go on stage and have fun. I don’t want to go no stage and come off feeling down and miserable. I’m not prepared to go back on that route again – no.”

Earlier this month Morse talked up Blackmore’s return suggestion, saying: “Fans would love it. It would be nice, I think, to see closure with everybody involved and the bad feelings put aside.”

Deep Purple released 20th album Infinite in April, tied in with a tour that may or may not be their farewell, which includes a run of UK shows in November.

Deep Purple: We’re still a bunch of kids inside