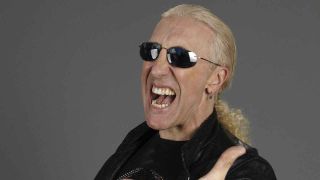 Twisted Sister frontman Dee Snider says publishing royalties earned from a Celine Dion cover of one of his songs turned his financial fortunes around in the late 1990s.

Snider and the band rode to success in the 80s on the wave created by the launch of MTV but, like many hard rock artists, he struggled to make ends meet in the late 90s when metal fell out of fashion and Twisted Sister had closed up shop. Snider pressed on, releasing projects as Widowmaker and Desperado while attempting to launch a radio career.

Fate stepped in to lend a hand one day when the singer’s wife made an unusual request.

Snider tell Chris Jericho’s Talk Is Jericho podcast: “My wife, in the height of my metal headedness, said, ‘Write me a Christmas song?’ And I said, ‘Are you insane?’ Christmas songs are genre-specific; when was the last time you heard a new Christmas song that sounded Christmas-y. You don’t, it’s so rare. She said, ‘Well, you can do it, you’re a classically trained counter-tenor.’”

“I get this idea that pops in my head - not a rock song – it’s a Christmas song. I can’t even sing it…it’s out of my range. So I hire people to do it, I record it as a gift for my wife for Christmas. It was called God Bless Us Everyone.”

Snider then gets a phone call that would change his life.

He explains: “One of the engineers, a few years later, becomes a Grammy Award-winning producer named Rick Wake. He called me one day and he goes, ‘Are you sitting down? Celine Dion wants to record God Bless Us Everyone.’”

Wake explained that Dion had a request of her own.

He tells Snider: “One other thing: She wants to change the name to The Magic Of Christmas Day (God Bless Us Everyone).” The singer responded: “I don’t care if she calls it This Song Is A Pile Of Dog Shit. Just put it on her album!”

The track appeared on Dion’s 1998 Christmas release, These Are Special Times. Snider says the publishing income from the cover paid off in a very big way.

“Eight million copies later, then it was on Rosie O’Donnell’s Christmas album and sold another two million. We call our house The House That St. Celine Built!”

Jericho asked Snider if the Canadian songstress ever learned of the songwriter’s identity.

He says: “I heard that she found out years later … and was very confused.”

We Are Twisted Fucking Sister, a documentary about the group, premiered last month at the International Documentary Film Festival in Amsterdam.

Following his response to Gene Simmons’ ‘rock is dead’ claim, the singer will release Rock And Roll Ain’t Dead – Dee Snider Essentials 1983-2015 next spring, which will feature tracks from throughout Snider’s career.