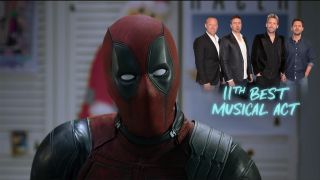 Nickelback are often used as a punchline by lazy music fans looking for a 'bad band' to poke fun at, but the Canadian rockers have found themselves an unlikely ally in Deadpool.

In the new trailer for Once Upon A Deadpool (a PG-13 version of both Deadpool films with additional footage), we see Fred Savage (aka Kevin from The Wonder Years) having a heated discussion with his masked friend.

After poking fun at Deadpool for not being a proper Marvel film, Fred says “It’s like if The Beatles were produced by Nickelback, it’s music but it sucks." This, in turn, causes Deadpool to reveal his adoration for Chad Kroeger and co., reeling off a list of their achievements and awards.

But it doesn't stop there. Seeing the error of his ways, Fred begins to sing Nickelback's smash hit How You Remind Me before the pair kick in to an epic rock 'n' roll duet complete with headbanging.

Nickelback responded to the trailer on Twitter, referencing the lyrics to How You Remind Me.

It’s not like @VancityReynolds to say sorry, we’ve been waiting on a different @deadpoolmovie story....... #MaximumEffort pic.twitter.com/Cb86Mewo22December 10, 2018

Once Upon A Deadpool is in cinemas for one night only on December 11.