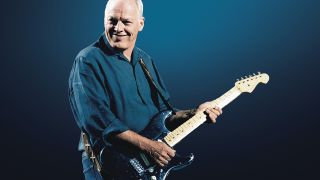 David Gilmour has spoken about Pink Floyd’s iconic album artwork in the latest episode of his podcast The Lost Art Of Conversation.

The guitarist gave exclusive access to BBC Radio’s Matt Everett to chat about the new 16-disc collection The Later Years, which will be released tomorrow (December 13) and brings together Floyd’s albums from 1987 onwards, along with live cuts and previously unreleased tracks.

In episode three, Gilmour looks back fondly at artist Storm Thorgerson, who was responsible for the majority of Pink Floyd’s striking artwork over the years.

Gilmour says: “He was a non-stop loudmouth and stayed that way for his whole life and he was the sort of guiding force behind most of our artwork throughout the years – he was brilliant.

“Brilliant ideas person and brilliant at getting things done... he was always there at the heart of it and always wanted to do everything properly – whatever it cost!”

Gilmour talks about the cover of Pink Floyd’s 1987 album A Momentary Lapse Of Reason and describes how it all came together.

He says: “I drew a picture of a room with a window and a bed which was empty, a bedside table with a picture frame on it with nothing in it, and I said to Storm, ‘I’m thinking something about this line from a song: ‘The vision of an empty bed,’ and showed him this picture.

The shoot would take place at Saunton Sands in Devon, with Gilmour adding that it “took an massive amount of work and time” involving “hundreds of people” who had to constantly move the beds to avoid the incoming tide.

Listen to the episode below.

Along with the albums, The Later Years will also include two 7-inch vinyl singles in new picture sleeves, featuring Arnold Layne performed live by Pink Floyd at the Syd Barrett Tribute concert in 2007, and Lost For Words from the Pulse tour rehearsals at Earl’s Court.

A 60-page hardback book of photos designed by Aubrey Powell of Hipgnosis and Peter Curzon of StormStudios will also feature, including many previously unseen images.

A collection of memorabilia including tour passes, stickers and posters, all printed to replicate the originals, and contained in a prestige card envelope, will also be in the collection.

Pink Floyd: The Later Years
This 16-disc collection brings together Pink Floyd's work from 1987 onwards and will feature the band's studio albums, along with live cuts, previously unreleased tracks and more.View Deal