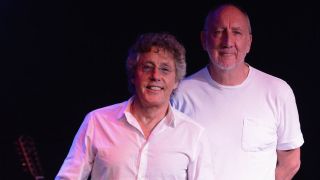 Roger Daltrey says The Who are set to record an album of entirely new material.

In the wake of the release of new track Be Lucky, the frontman has dropped another hint that the band could be set to finally follow up 2006’s Endless Wire.

The band have lined up a UK tour later this year to celebrate their 50th anniversary, and will also release a 2CD compilation album called The Who Hits 50 on October 28.

Daltrey tells The Mirror: “The Who have got a new record out. It’s 50 years on and we have passed the audition. We’ve done one song and we are going to do a whole album. It’s exciting.”

Earlier this year, guitarist Pete Townshend revealed he had passed a number of demos featuring new material to Daltrey. Townshend said: “Happily, he likes them so we’re thinking of trying to get into the studio this summer.”