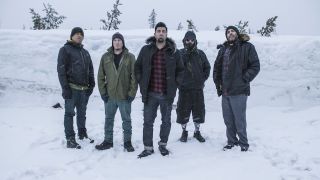 Deftones frontman Chino Moreno says the band are working on new material for what will be the follow-up to 2016 album Gore.

He says he doesn’t have a timeline for when the album will hit the streets as they are taking their time, but reports that what they have so far is sounding “powerful.”

Moreno tells Argentinian website Rock.com: “There are six or seven songs which are still mutating. They are very powerful and I am anxious because it’s been a collaborative process.

“I think all of our albums were postcards of what we were going through at each moment. With 1995 debut album Adrenaline, we were boys, while 2000’s White Pony, we had matured a little. Everyone has their own feelings, because it belongs to an era.

“Today we are older but we still enjoy making songs with marked riffs, cool melodies and a lot of groove. It’s fun.”

He added: “We don’t try to box ourselves in to these pre-conceived ideas, but we have talked about getting together sooner rather than later to start making noise together – just out of pure excitement of creating music.”

Deftones will play at London’s Meltdown festival between June 15-24 at the city’s Southbank Centre. This year’s edition is being curated by The Cure’s Robert Smith.