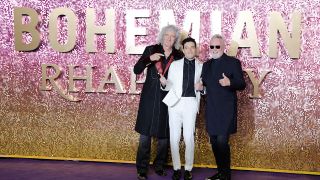 Queen’s Brian May says the band have yet to earn any money from Bohemian Rhapsody despite its global success.

The film has brought in more than $900 million at the box office, making it one of the biggest movies in recent years, and has scooped a truckload of awards including Oscars, BAFTAs, Golden Globes and more.

Last week the Sunday Times Rich List reported that May, Roger Taylor and the band’s former bassist John Deacon were all worth £25m more than they were last year. But was that down to the success of Bohemian Rhapsody?

Not according to May.

Speaking about the film with Zoe Ball on BBC Radio 2, May said: “It was a long labour of love – about 12 years in development. We thought it would do well in the end and we felt good about it, but we didn't realise it would do that well.

“It's incredible around the world – it’s a billion-dollar movie.

“I had to laugh the other day, because there's a thing in the paper saying that we were getting rich off this movie. If they only knew. We had an accountant in the other day, and we still haven't earned a penny from it. Isn’t that funny? How successful does a movie have to be before you make money?"

May adds: "There's so many people that people don't realise will take pieces off the top, but the feeling of it is so great – the fact that it's out there. I think Freddie comes out it with his dignity, but without having been whitewashed in any way.

“It's very real. It makes people cry. I think people are astounded how close to Freddie Rami Malek got. It's phenomenal the way he got inside Freddie's body somehow – inside his skin.”

May also talks about other subjects, including his solo single New Horizons, which he launched on January 1 to coincide with NASA's mission to encounter a remote Kuiper Belt Object named Ultima Thule. It was the most distant spacecraft flyby in history.