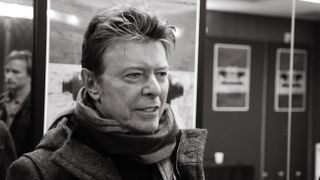 David Bowie producer Tony Visconti says he is unaware of any other ‘easter eggs’ hidden in the artwork of the late Bowie’s album Blackstar.

Earlier this year fans discovered that exposing the sleeve of the vinyl version of Blackstar to light revealed the image of a galaxy.

Visconti’s comments come after Jonathan Barnbrook – who designed the Blackstar artwork with Bowie – said there were further hidden secrets in the artwork.

Barnbrook told the BBC: “There’s actually a few other things as well. Actually, there’s one big thing which people haven’t discovered yet on the album.

“Let’s just say, if people find it, they find it, and if they don’t, they don’t. And remember what Bowie said about not explaining everything.

“There are a lot of other things going on that aren’t at the surface. I do hope people see them. Not necessarily straight away.”

But Visconti knows nothing of the so-called ‘easter eggs.’

He says on Facebook: “If anyone has found these secrets can you please tell me where to find them? I only co-produced the album.”

Since Barnbrook’s revelation, fans have been trying to uncover further secrets from the artwork, with Spin collating the suggestions.

This week, Bowie collaborators Mike Garson, Earl Slick, Adrian Belew, Gail Ann Dorsey, Sterling Campbell and Gerry Leonard announced they will appear at an event at Brixton’s O2 Academy in London on January 8 to celebrate what would have been the star’s 70th birthday.

Bowie died in January of this year after a long battle with cancer and just days after Blackstar’s release.