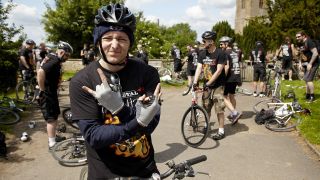 If you haven’t seen the English countryside for yourself, you’ve probably heard something about it: pretty, idyllic, picturesque - as if some magical painter crafted an oil-on-canvas vision of lush greenery and wondrously manicured cottages and allowed the world to step through, only none of that’s really true if you’re pedalling through it. For us, he English countryside is hell on earth, a relentlessly undulating plane of misery and suffering that’s gleefully punishing the 37 riders comprising this year’s Heavy Metal Truants, and we’re smiling every inch of the way. A) It really is just absolutely, eye-wateringly gorgeous out here, and B) we chose this for ourselves. It’s the second year that a charity cycling group founded by Iron Maiden manager Rod Smallwood and yours truly to benefit kids in need. If there’s one thing we know about this hellish experience, it’s that the people who heroic organisations like Nordoff Robbins, Teenage Cancer Trust work for are the ones truly going through tough times, and they’ve no say in the matter. So what’s 161 miles of hills? As it turns out, it’s a thought that’s incredibly motivating.

We set off bright and early from the high hill of Alexandra Palace for the Lea Navigation, which took us northward to Dunstable, a far better experience thanks to the rather brilliant metal producer and Hell guitarist Andy Sneap’s portable sound-system. ‘Nothing after ’85,’ he said, which - given the company present - was hardly going to get an argument. With a contingent of fans, industry types, and proper musicians like Dave Silver from Savage Messiah, James Monteith from Tesseract, Gizz Butt from the More I See, Kev Bower from Hell, and mighty Ben Ward from Orange Goblin who for a man the size of a house is incredibly fast on a bike, music was at the forefront of conversation. More importantly though, there’s such a spirit of community and solidarity running throughout he people who’ve chosen to step outside of their daily lives and do something for a common good. As we powered Northward toward an awaiting, sleepy-eyed dinner and the promise of a 6am wake-up call, it was hard not marvel at just how absent even a hint of complaint was even though the suffering was intense. Perhaps it was the grave tones of last year’s riders reassuring the new ones that day two, all 82 miles of it, would be the real test of our mettle.

That morning it was hard to shake the butterflies - the thought that we’d be in our saddles for the next eight hours, minus breaks, was a hard one to downplay but there’s something about getting a group of people together for charity that means you relish the experience rather than dread it, and the proof is in the money we’ve already raised for kids in need, and that’ the only finish-line worth worrying about. So you might imagine what a treat it was that metal comedian Stephen Hill turned up for a bit of edgy, shout stand-up followed-up by an incredibly exclusive acoustic set by the Answer, who quite simply blew our minds with their generosity at diverting their plans for arrival at Download to stop by and show us all a good time - thanks lads. And so we face a bleary-eyed morning for what feels like a victory lap to Castle Donington and Download Festival. We’ll be arriving around lunchtime, say, 12:30, and we can’t wait to see some of you there. Please spread the word about what we’re doing, follow us on @hmtruants, and if you’ve some money to donate please absolutely do so by going to http://www.heavymetaltruants.com

Thanks for your support, and stay metal.