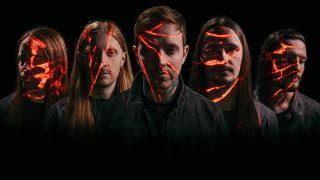 Bleed From Within have announced that their new studio album will be released later this year.

The Glasgow outfit will launch Fracture on May 29 through Century Media Records and have marked the news by sharing a video for their new single Into Nothing.

Bleed From Within say: “Into Nothing is the second single taken from our forthcoming album Fracture. We wanted to release something darker this time round. This song looks at those who govern and questions their motives.

“At such a turbulent time in our society, this track has grown into something more. It acts as a social and political commentary. A call to those who feel abandoned and a reminder to the elite of who really holds power within our communities.”

Bassist Davie Provan is once again behind the striking cover art, and he explains: “Sharing our album cover with the world is incredibly cathartic.

“Every album we’ve ever released holds a special place with all of us, and this is no different. Fracture is a statement of intent – breaking away from all we’ve known and moving forward as a band. The journey starts here.”

Bleed From Within released the first single from Fracture The End Of All We Know in 2019.

Fracture is now available to pre-order.