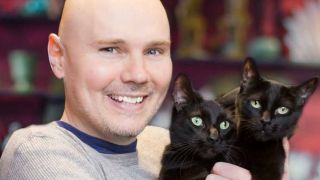 PAWS is an animal shelter Chicago. After raising $60,000 for the organisation last year by auctioning off a private concert including dinner for 12 people, Smashing Pumpkins' singer Billy Corgan has appeared on the cover of their magazine.

The cover image features Corgan with Sammi and Mr. Thom, two kittens he adopted from PAWS. “They’re rock ‘n roll cats, used to different environments,” Corgan says. “I was raised in homes where animals were part of the family but subservient to other goals. In my home, the animals run the show. At best we’re equals. But that’s the way it should be. They have every right to live and be happy as much as I do.”

“My mom was a cat person and I used to marvel at her weirdness over her cats”, he says. “I was dismayed that she had more pictures of cats than her children… but I inherited my mother’s cat person thing.”

Cat lovers may wish to download a pdf of the PAWS Chicago magazine to read the interview. Smashing Pumpkins are currently working on two albums for 2015.