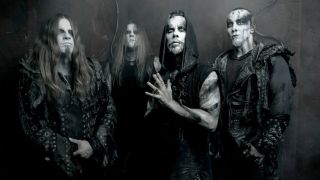 Behemoth have announced that they plan to release another beer.

They launched their Sacrum pale ale earlier this year in collaboration with Polish brewery Perun. And Nergal and co have joined forces with the firm once again – this time for an American amber ale bottled at 5.5% ABV called Heretyk.

Iron Maiden, Slayer, AC/DC, Motorhead, Queen, Metallica and Cannibal Corpse have all launched their own beer in recent times.

Frontman Nergal will appear on the bill with Fields Of The Nephilim at London’s Islington O2 Academy on December 17 – the fifth anniversary of his life-saving bone marrow operation.