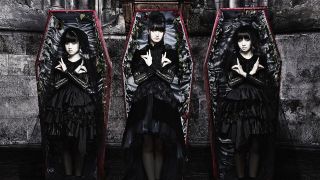 Babymetal have confirmed that their second album will be titled Metal Resistance.

No further details on the follow-up to their self-titled debut have been released. It’s set for launch on April 1 via earMUSIC – a day the group have branded ‘Fox Day.’

Su-metal, Yuimetal and Moametal will start a world tour at London’s Wembley Arena on April 2, and wrap up at the Tokyo Dome on a date still to be announced. They’ve also announced a handful of shows in the US following their UK appearance.

Su-Metal says: “I will be putting my everything into the production of our upcoming album because I believe that many of you are waiting for it. We are looking forward to meeting our fans abroad again next year at Wembley Arena right after the release of our second album, so you can expect to hear our new songs for the very first time live there.”