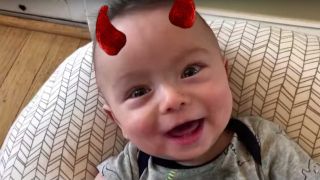 The web has gone nuts for a video in which a baby appears to "sing" the AC/DC classic Thunderstruck.

We say "appears" because the baby, who goes by the name of Ryan, clearly isn't capable of performing unattended. What he can do, however, is rely on a nearby parent to manipulate his junior vocabulary into something that's musical enough to go viral.

Dad Matt MacMillan says, "I recorded my son making baby noises, figured out the notes he made, and arranged them into Thunderstruck by AC/DC."

And very good it is too. Ryan's various yelps, sighs, coos, grunts and gurgles don't quite match the AC/DC version for sheer volume, but Matt's editing ensures that the performance lacks none of the original's velocity.

Earlier this week, Australian broadcaster Eddie McGuire claimed that AC/DC will release their new studio album in the coming weeks – and will back that with a tour in late 2020.

This comes after former Twisted Sister frontman Dee Snider also reported that the rumoured reunion is on.

He posted a series of tweets addressing the current situation in the AC/DC camp and confirmed that “all four surviving members” were involved in the recording of an album, and that it will include tracks recorded by the late Malcolm Young.