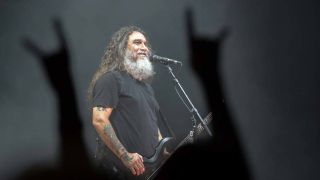 Tom Araya has opened up on the contract dispute that led to Dave Lombardo getting the sack from Slayer.

The band split with drummer Lombardo for a second time in 2013. He was replaced by Paul Bostaph – who had also stepped in when Lombardo left in 1992.

Frontman Araya has spoken out to “set the record straight” on Lombardo’s latest exit and says the sticksman talked his way out of the lineup.

Araya tells The Skinny: “Going back a long time now, 15 years nearly, we were looking for somebody to sit in for Paul Bostaph — that’s how long ago it started with Dave. Paul decided to move on, but he stuck with us until we could find a replacement.

“We came up with a simple agreement that lasted a while, and then we were in the process of trying to make it better for Dave. We came up with a deal and he basically was getting everything he wanted, but it was a three-year term, and three years into that, we still hadn’t been able to get him to sign it.

“We had some obligations that came up and when you’re given an ultimatum or put on the spot, you have to do something, so we moved forwards, and Dave got really upset. We went back to him again and told him that if he signed the deal, we could move forwards, but he had other plans, so we made a phone call to him and ended it, because he was beginning to put us into a bad spot. We managed to find somebody to sit in, we went off to play in Australia and Dave went on a rant and told a lopsided story, and we let him talk and do what he does best.”

Araya adds that Lombardo’s actions put the band “in a really bad light” and insists that they never wanted Bostaph to leave in the first place. He says: “Paul’s the only other drummer for this band, he’d replaced Dave before, and become kind of a fixture in his own right. We did several albums with him, and in fact, if he hadn’t left, he’d still be in the band. That was the level he was at with us.”

Bostaph returned in time for Slayer’s upcoming 11th album Repentless, which is released on September 11. Slayer tour the UK with Anthrax in November.