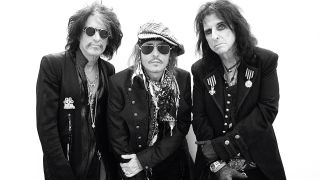 The follow-up to Cooper, Depp and Joe Perry’s self-titled 2015 record will launch on June 21 via earMUSIC, with Cooper reporting that he largely took a back seat when it came to the writing process on the new album.

Guitarist Depp wrote several songs on the record on the back of the trials, tribulations and negative press that have surrounded the actor and musician over the last few years – much of which was documented by Rolling Stone last summer.

And Cooper tells UCR that some of the songs Depp wrote were to “get back at people.”

Cooper says: “I think he wrote a lot of songs on this album that are to get back at people. It’s him going, ‘OK, you’ve set out everything you can do to destroy me, who’s laughing now? I’m still here. And I’m making these records and I’m still going to make movies and I’m still a better actor than most of the people out there. Who’s laughing now?’

“There’s two or three songs like that on the album that I’m singing and going, ‘Wow, I’m the voice of Johnny’s anger! Normally, I’m writing songs that concern me. Now, I’m sort of the mouthpiece for Johnny, which is great.”

As for being out of the picture for the initial songwriting process, Cooper says: “It was really interesting for me, because when I do my show, I write all of the songs and I know why I wrote them and I know what they’re supposed to be.

“On a lot of this album, I was on tour when they were writing this stuff and I would go in and touch this up and they’d say, ‘OK, let’s cut this here, what do you think about this?’”

Along with 13 tracks of original material, Rise will feature covers of David Bowie’s Heroes performed by Depp, the Jim Carroll Band’s People Who Died, and Johnny Thunder’s You Can’t Put Your Arms Around A Memory.