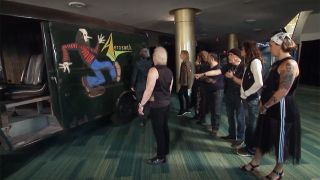 It was found by Mike Wolfe and Frank Fritz, the hosts of American Pickers, a reality TV series shown on The History Channel.

The pair and their team set about restorong the 1964 International Harvester Metro van to its original glory – and, with the project now complete, they've handed the keys back to Aerosmith in the latest episode of the show.

A trailer for Aerosmith Gets Back in the Saddle can be seen below, and shows Steven Tyler, Joe Perry, Tom Hamilton, Joey Kramer and Brad Whitford reminisce about their days cooped up in the vehicle as they travelled from town to town.

Drummer Kramer says: “We spent a lot of time and hours travelling in this box, and it looks and feels the same.”

Guitarist Perry adds: “I can’t remember a time when we were left stuck – it always ran. We all lived together and were doing our thing.”

As for their plans for the van, Aerosmith say they’d like to incorporate it into their Las Vegas residency and eventually park it for ever at The Rock And Roll Hall Of Fame.

Aerosmith's next shows at the Park Theater at the new Park MGM resort in Vegas will take place in September.