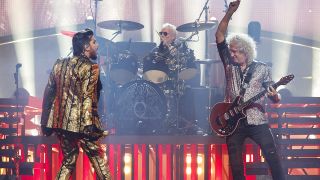 Adam Lambert has spoken about late Queen frontman Freddie Mercury and says he would loved to have met him.

Lambert has toured with Brian May and Roger Taylor since 2011 – most recently on the Rhapsody North American tour – but recently revealed why it was unlikely that he’d ever recorded an album with the band.

In a new interview with SiriusXM, the singer says: “I keep hearing from so many original Queen fans, especially dads, who say, ‘My teenage son loves Queen now’ – and it’s because of the Bohemian Rhapsody movie.

“I think that’s amazing and I’m so proud of the band and so happy for them that this has sparked this new pop culture moment for them.

“They deserve it and these songs are timeless – they're fantastic. I think it’s amazing having Freddie elevated in the way that he has been and seeing him cement himself as even more of an icon. He’s held in such high regard.

“That’s one of the things I love about being on tour with the band is that I get to carry a torch for this hero of mine.”

Lambert adds: “I didn’t know him but Brian May and Roger Taylor say there are definite similarities and they say, ‘We think you would get a kick out of each other – you probably would have enjoyed each other’s company.’ That means a lot.

“I just wish I had known him. I wish he were alive so I didn’t even have the gig. He was amazing.”

Lambert will join Queen again in early 2020 for a run of shows on the Australian leg of the Rhapsody tour.