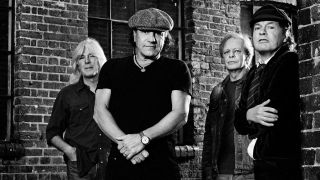 Rock or Bust is the second track to be unveiled from forthcoming album, which hits the stores on December 1.

The single comes in the wake of Angus Young’s revelations that Malcolm Young was beginning to show signs of dementia before the sessions for the band’s last album, 2008’s Black Ice.

“Angus must have felt strange playing these tunes without Malcolm”, Brian Johnson tells Rolling Stone, but says that Stevie Young is working hard to fit in. Album producer Brendan O’Brien confirms this, adding “the super-important thing about AC/DC is the left-right thing in the guitars. Stevie understood that. He put on the same guitars, through the same rig, and got the same sound.”