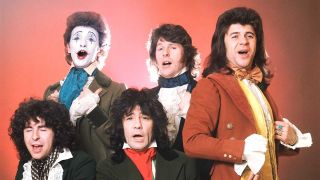 They crammed eight albums and countless tours into not much more than five years. They had a stage act and image ideal for video (a medium still half a dozen years into the future).

Loud and often lewd, they were role models for the punk wave, but split in acrimony the year the Sex Pistols’ first album was released. And at the end of it all, having seen their charismatic figurehead cancel a major European tour at 48 hours’ notice, each member of The Sensational Alex Harvey Band found themselves “80 grand in debt”.

First and foremost a live band, it wasn't until a tongue-in-cheek take on Tom Jones’ Delilah reached No.7 in the UK singles chart in 1975 did the record-buying public at large catch on to what rock concertgoers had known for years. But by that time it was almost too late.

The SAHB story began in 1971 when cousins Ted and Hugh McKenna joined Tear Gas, a Glasgow band destined to remain cult favourites until they met a certain Alexander Harvey. Back in 1956, when his future bandmates were still in short trousers, Harvey had earned the title of ‘the Tommy Steele of Scotland’ by winning a local talent show. And if his reputation survived that, it could survive almost anything.

After the obligatory spell following in the Beatles’ footsteps in Germany (later the inspiration for the song Action Strasse) Harvey then headed south of the border, spending four years, on and off, in the band of controversial London hippie musical Hair.

The man who matched Harvey and Tear Gas was Bill Fehilly. He had made a million through running a string of bingo halls, and put much of this on the line backing The Sensational Alex Harvey Band and fellow Scots rockers Nazareth.

He even formed a record label, Mountain, to release their music (although SAHB’s first album, Framed, was on Vertigo). So was SAHB four against one?

Ted: “Nothing like that. Alex joined in with what we were doing a lot of the time, even though he was the ‘leader’. Alex had a lot of experience, and a way of doing things that demanded attention and respect. We thought: ‘What have we got to lose?’”

Guitarist Zal Cleminson: “You’ve got to remember we were all 21, 22, 23, and Alex was already 37 – 16 years older. As he himself said, his experience and our enthusiasm went well together.”

A UK tour supporting Slade plus the first of several appearances on the BBC’s late-night music programme The Old Grey Whistle Test put the new SAHB on the map immediately. Live on the show in 1973, they performed Next and Faith Healer, two tracks from the band’s second album (also entitled Next) that have a special place in SAHB mythology.

Next, Jacques Brel’s title-track tale of depravity could have been tailor-made for Harvey, with lyrical reference to whorehouses and sexually transmitted diseases. But bassist Chris Glen admits the band were “not impressed when Alex proposed we do a tango. We all went okay, it’s not exactly what we’re used to playing, but we’ll have a go and see what happens.”

Faith Healer, meanwhile, single-handedly made Alex and the band the hit of the 1973 Reading Festival. “Everyone went completely wild,” Cleminson confirms. Yet like so many great rock’n’roll moments it was born out of pure chance.

Glen: “Faith Healer was an accident, in that we had to extend the track. In those days the cassette had to be the same length on each side. And we ended up about two minutes short, so we stuck a loop on the front of it!”

Twelve months later, SAHB returned to Reading as headliners. Most of 1974 was spent trying to break the US where, Cleminson says, they “had a problem – some bands wouldn’t like to follow us”.

Glen: “There were people who said: ‘We love you to bits but your band’s not playing wi’ us’.”

The result, Ted says was that “we ended up getting tours that weren’t really suitable. We did a big tour with Jethro Tull, but their audience wasn’t really right for us.”

“We played anywhere and everywhere, so we had grass-roots fans,” Cleminson explains of the early days. That was the policy of all the bands that went to the States, before MTV, before video. And one of the things that got to us, and to Alex, was that when we went to new territories we had to do songs from the first album. We wanted to move on, but the management said: ‘Get a hit single, then you can do what you want’.”

A hit single?! To SAHB that must have seemed a million miles away. But in the summer of 1975 it happened. “Delilah was a complete accident that did us as much harm as it did good,” Ted reflects. “I met someone a while ago who told me they didn’t like us. I asked why, and they said: ‘I don’t like comedy acts’. That was someone who never saw the band live, just saw us do Delilah and thought we didn’t take ourselves seriously. It was a double-edged sword alright.”

The band could play for laughs when they wanted to: the McKenna cousins rocking with gusto as the striped-shirted Harvey and the extravagantly made-up Cleminson camped it up in the limelight. Their next biggest hit single, Boston Tea Party, won them a return booking on Top Of The Pops. But the subsequent covers-packed Penthouse Tapes was a musical wrong turn that screamed ‘contractual obligation’.

In Harvey’s defence, he’d been using other people’s songs subversively for some while. Opening SAHB’s set with the Osmonds’ Crazy Horses had been known to polarise audiences, but there were those who thought he had now chosen to give the record company an album’s worth of Delilahs to play with.

A live album was the logical next step. “We never really produced the live thing 100 per cent on record, though we came pretty close,” Cleminson argues.

Glen: “If only we’d sold the same amount of records as the people we played to. People would tell us they played the record to their friend and they didn’t get it, but when they actually saw us the record suddenly made sense.”

Even now, Cleminson still rates SAHB’s sell-out Christmas dates of 1975 as the highlight of his musical career. That should come as no surprise, however, given the theatrical, almost pantomime nature of their act. It’s a shame no one filmed the gigs, which have gone down in Glasgow folklore (the city’s listings mag The List gave SAHB a Lifetime Achievement Award).

If 1975 saw The Sensational Alex Harvey Band crack it, the following year saw the house of cards come tumbling down. Yet it had started promisingly with SAHB Stories (their last UK chart album), and was buoyed by appearances with The Who at Charlton and Parkhead football grounds. The well-lubricated terrace crowds were a powder keg primed to go off, but the charismatic Alex kept them under control. But his own control would be tested to the limit when, in July, manager/label boss Bill Fehilly was killed in a plane crash.

Ted now sees this as when “Alex started to hit the skids. With his brother Les dying, and then Bill, he was never the same.” (Harvey’s younger brother, lead guitarist with Stone The Crows, was electrocuted on stage during a show in Swansea in 1972.) The shock of Fehilly’s death, combined with the punishing pace of touring, led to Alex collapsing during a mammoth European trek.

A break was ordered, during which he starved off boredom by conducting interviews for a spoken-word album about the Loch Ness Monster. The band’s own ‘pet’ project was Fourplay, credited to ‘SAHB (Without Alex)’

But the writing was on the wall. Harvey had enjoyed his first single at the age of 40, but as his fifth decade wore on so his body, racked by the demands of a rock’n’roll lifestyle and a predilection for drink, started to give out.

Keyboardist Hugh McKenna, too, was ailing, and would be hospitalised through nervous exhaustion, causing the band’s first ever cancelled gig. Hugh would bow out totally in early ’77 to confront his own problems, some of them again drink-related.

Tommy Eyre filled his place, but the gang spirit was already sorely weakened. The band had to pull a TV appearance, which proved a blessing for AC/DC, a group of young Australians who had idolised SAHB from afar and then made their acquaintance after making their home in London.

Harvey then quit two days before a tour. And without a band to promote it, eighth album Rock Drill proved to be a damp squib with which to end the explosive SAHB story.

Had they their time again, would SAHB have changed things – taken a break from touring to avoid burning themselves out, for example?

Cleminson: “At the time, we weren’t offered any alternative.”

Ted: “In retrospect, I’d have liked to have seen the accounts earlier on instead of finding out all these years later that we each owed something in the region of 80 grand. That’s what we got for selling out everywhere.

"So that points at management. Then there is the other opinion that they had to spend a lot of money to try to break us in America – it’s only rock’n’roll, but it’s expensive. I think if we hadn’t been caught up in that…”

This feature was originally published in Classic Rock 78 in December 2004. The band reformed for occasional shows before disbanding in 2008. Ted McKenna died in 2019.