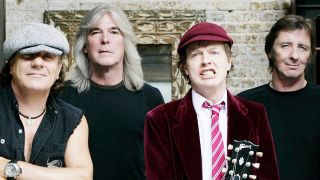 AC/DC have begun studio work in Canada on a prospective new album – without mainman Malcolm Young.

It was confirmed last month he’d be “taking a break” from the Aussie giants after suffering health issues, which are rumoured to be serious.

A fan site confirmed that several long-term roadies had arrived with band equipment, and that producer Brendan O’Brien is behind the desk. He previously worked with them on 2008’s Black Ice and has also produced Aerosmith, Bruce Springsteen, Mastodon, Killswitch Engage and many others.

Vocalist Brian Johnson recently said AC/DC had been planning to perform 40 shows to mark their 40th anniversary – but the move is in doubt after the announcement regarding Young.

Meanwhile, early-era drummer Tony Currenti, who appeared on AC/DC’s first album, has performed live for the first time since the 1970s.

The former session musician, who now owns a pizza restaurant in Sydney, appeared in a music venue in the city and played three numbers with a group of local musicians.

Author Jesse Fink reports: “After 38 years away from the music, High Voltage and 74 Jailbreak drummer Tony made an impromptu return last night at the Bald Faced Stag.”

Fink adds that Currenti tried to make contact with his former colleagues in 2010 but “his efforts were unsuccessful.” He recently reconnected with former AC/DC bassist Mark Evans.