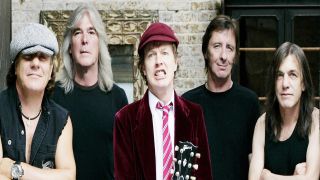 AC/DC singer Brian Johnson has stated the band are not retiring yet – and they're planning to go ahead with studio sessions in May.

But his comments suggest there’s at least a hint of doubt about the Aussie giants’ future, and no guarantee that their planned 40th anniversary tour will go ahead.

There’s been a flurry of speculation in recent days after it was rumoured that mainman Malcolm Young was too ill to continue, and that a long-standing agreement amongst the quintet meant that if one of them left the entire band would fold.

Now AC/DC have confirmed in a statement: “Malcolm is taking a break from the band due to ill health. Malcolm would like to thank the group’s diehard legions of fans worldwide for their never-ending love and support. In light of this news, AC/DC asks that Malcolm and his family’s privacy be respected during this time. The band will continue to make music.”

Johnson earlier told the Telegraph: “We are definitely getting together in May in Vancouver. We’re going to pick up guitars, have a plonk and see if anybody has got any tunes or ideas. If anything happens we’ll record it.”

He’d previously confirmed that one of the band, believed to be Malcolm, was suffering from ill health – but he refuses to add more details.

“I wouldn’t like to say anything either way about the future,” said Johnson today. “I’m not ruling anything out. One of the boys has a debilitating illness, but I don’t want to say too much about it.

“He’s very proud and private. A wonderful chap. We’ve been pals for 25 years and I look up to him very much.”

Referring to plans for AC/DC to play 40 shows to mark their 40th anniversary, Johnson reported: “That would be a wonderful way to say bye-bye. We would love to do it – but it’s all up in the air at the moment.”