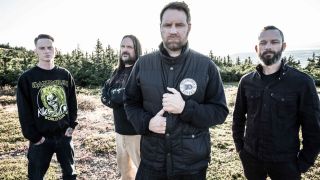 36 Crazyfists have launched their own range of branded ice hockey gear, the band have announced.

Frontman Brock Lindow is a diehard Philadelphia Flyers fan – and the range of apparel, which includes shirts, hats and hoodies, has been designed in the team’s colours of orange, black and white.