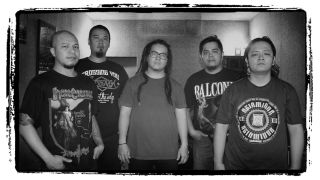 Now that Indonesia has elected the world’s very first heavy metal president, Joko ‘Jokowi’ Widodo, the future for the nation’s extraordinarily diverse and populous metal scene looks very bright indeed. There are hundreds of great metal bands in Indonesia and, perhaps more importantly, an admirable sense of unity and shared passion that binds the scene together. See below for a tantalising snapshot of some of the skull-crushing riches the Indonesian metal community has to offer. We don’t doubt for a second that President Jokowi would approve.

The pride of Bandung and Golden God-winning metal heroes, Burgerkill fucking rule, as this highlight from their latest album Venomous proves.

(And you can read Burgerkill’s reaction to Jokowi winning the Indonesian election here.)

These Golden Gods 2014 nominees specialise in a self-proclaimed “hardcore thrash attack” that fans of Sepultura will embrace without question.

Grindcore is a universal language, surely? Deadly Weapon’s ferocious, blasting onslaught seems to suggest so. This rips. Hold on to your face.

Another slab of strident, turbo-charged stoner rock from one of the most thunderous bands in Southeast Asia. Taken from the superb 2012 album Suar Marabahaya.

Down For Life – Prosa Kesetaraan

Erupting from the streets of Solo, Down For Life are modern metal monsters and this track from current album Himne Perang Akhir Pekan is an authentic face-smasher.

Outright – Never Give Up

The Indonesians love their metallic hardcore, and no-one from the region does it better than Bandung’s Outright. Pit-inciting, vest-wearing beatdown fans assemble!

One of the most ferocious live bands in Bandung, Gugat’s genre-blending battery is a glowing advert for Indonesian metal’s freethinking mindset. Extra points for the use of traditional Sundanese instruments, too.

Bonkers math-metal extremity from one of Indonesia’s most unhinged bands – this is one for the Dillinger fans (and anyone else that suffers from ADHD).

Psychedelic stoner behaviour of the highest order – this is the title track from The Sigit’s latest album, and it’s a real trip into the heavy cosmos. Light ‘em up!

Brutal death metal, Bandung-style… Kaluman’s sound is vicious and uncompromising, but full of groove too. Their self-titled debut album is an absolute ripsnorter.