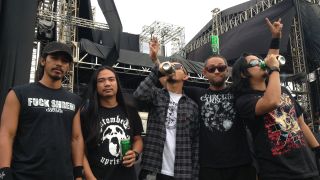 The news that Indonesia has elected Joko 'Jokowi' Widodo as their new president has become front-page news around the world. But for the country's home-grown metal scene, the arrival of their new political leader has particular significance. As we've already noted here, Jokowi is a bona fide metalhead and a regular patron of metal gigs in Indonesia. According to Ebenz, guitarist with Indonesia's biggest metal band Burgerkill, Jokowi's credentials as the world's first metal president are plain for all to see.

“The first time I saw Mr. Joko Widodo, when he was mayor of the city of Solo, was at a Burgerkill show at the Rock In Solo festival back in 2011. I’d heard previously that he listened to metal music and he genuinely seem to know how to enjoy a metal show. He stood in the front row watching our show from start to finish. I personally felt weird thinking that the mayor was actually watching our show! Usually, people in the government just don’t give a fuck.”

Not only a supporter of his country’s huge number of talented metal bands, President Jokowi has also demonstrated his love for the greats of the genre, citing the likes of Metallica, Megadeth and Lamb Of God as favourites and making his presence felt whenever big overseas bands perform in Southeast As.

“The second time I saw him was at a Judas Priest show in Singapore back in 2012,” Ebenz continues. “Jokowi was the Governor of DKI Jakarta by then, the provincial capital of Indonesia. It seemed like he just didn’t care about his status as leader of the country’s central province as he enjoyed the show with thousand others in standing area. The third time I saw him was at a Metallica show in Gelora Bung Karno Stadium in Jakarta. He was in the standing area again, not the VIP section, and thousands of metalheads screamed his name like he was the star of the night!”

In the main, Indonesian society has always been culturally conservative and has never quite got to grips with the proliferation of metal and its culture, even as a primarily underground movement. The election of Jokowi to high office may not cause an immediate change in people’s attitudes, of course, but it certainly offers a ray of hope to Ebenz and his countless metal-loving comrades that the future might be brighter and full of opportunity. The man in charge is a metalhead, so clearly anything is possible!

“I’d like to congratulate Mr. Jokowi, a metalhead like us, on becoming the President elect of Republic of Indonesia,” Ebenz states. “You don’t have a metalhead as your president very often, so I am hoping that metal music will get more respect in our country. It’s not music that will make kids go straight to hell like many Indonesian parents believe. It’s just an aggressive (and also beautiful) style of music that our president will enjoy while leading the country!”