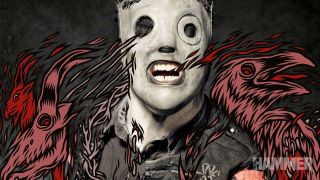 So, Metal Hammer has had a big redesign. This is a new era for our magazine, which means a brand new look, new regular features and more access to the biggest and best names in metal than ever.

And, to kick off our next chapter, we have a beast of a cover for you, including exclusive new art by Tom Newell.

For this month’s cover feature, we sit down for a world exclusive interview with Slipknot legends Corey Taylor, Clown and Joey Jordison to get the full, uncensored story behind All Hope Is Gone, getting the definitive look inside the end of an era for the very first time.

And, as well as the interview itself, you also get an exclusive Slipknot Guide To Life book, plus a giant art poster with two different, exclusive illustrations

Also in the new-look Hammer, we take a look at the new Babymetal comic!

We talk to Amon Amarth about their epic new documentary.

And we dissect Metallica’s classic covers album Garage Inc, with some help from the bands who influenced it.

And find out what led Coheed And Cambria to re-embrace the Amory Wars.

And there’s new-look reviews, new-look new band pieces and a whole lot more you’ll have to open up and find for yourself!

Come get stuck in to the next chapter of Metal Hammer with us. It rules. We promise. In stores now! And available online.