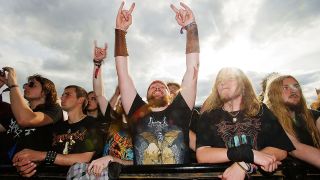 A couple of months ago, Metal Hammer online editor Luke Morton wrote a piece about the death of the music genre, and why that was a positive thing for metal. It’s very good and, if you’re an open-minded music fan, you’ll doubtless find yourself nodding along in agreement with the central argument – namely that with every song in the world ever written available to you at the touch of a button on your phone, why on Earth would you limit yourself to listening to just one type of music? It clearly makes perfect sense!

So, why did reading it make me feel so sad? Why did I feel a pang of longing for the days when it really did feel like if you were a metal fan then you were somehow intrinsically connected to the stranger you’d see walking down the street wearing a Sepultura t-shirt?

Obviously, it would be dishonest to deny that much of it has to do with romance. Nostalgia is big business in 2018, and I’m sure you can’t tell me that you’ve never spent an afternoon deep in a YouTube rabbit hole, looking at old footage of Ozzy or Metallica or Nirvana or Korn invading MTV, or Top Of The Pops, or TFI Friday, and wondering what that would look like now. Or, more pressingly, why it doesn’t happen now.

It’s simply, really: those bands benefitted from an entire subculture converging upon them. It was a collective swell from the underground to storm the gates of the mainstream. That doesn’t happen anymore, and in its place is a group of individuals with our own little personal Spotify playlists. Each one of us have become our own very own personal micro-scene, and our bands are suffering for it.

In the (I’ll stop short of calling them ‘good’) old days, scenes and sounds were born from a regional or socially collective ideology and came to totally define an era. For example: the powder keg that Van Halen lit on the Sunset Strip in the late 70s manifested itself into the most debauched and OTT period in heavy music’s history; a place where you went to party and live your dreams produced music that sounded like exactly that. Now, that time and place is so evocative of that period of time that you can’t imagine one without the other. It was the excess of the 1980s manifest, and was promptly lapped up by millions. It feels like that collective feeling has vanished now.

Of course, hair metal became ludicrous and ate itself whole, and then, up in the rain and gloom of Seattle, a bunch of musicians provided the perfect antidote. A whole new generation turned them into icons...before it all became a bit too dour; all the best bands split up or passed away, and the freaks of the nu metal carnival gave guitar music another Day-Glo shot in the arm. This was music's ecosystem in full effect; react, adapt, implode, get replaced. The circle of life.

That’s over these days. Now, there really is room for everything. Each subgenre exists on an even keel, which is a beautifully utopian idea, but the reality means that in 2018, metal can often feel like it has no defining characteristic. Like we’re all at a fancy-dress party where the theme is to celebrate the iconic looks of the past. That focus is split and spread all over our scene, and, as an outsider art, if we want to upset the status quo, we need to find a commonality.

Metal doesn’t live or die on its invasion into the mainstream, but a swell of exciting bands that came through the ranks together and came to define an era used to make for some truly memorable moments in our history. The success of Pantera giving them a number one album in the US surely helped, say, Corrosion Of Conformity to get on cult UK Friday night youth show The Word. Which, watching back today, looks like some sort of unbelievably exciting capsule from an alternate universe. How many fans were first exposed to our world through a short taste of thrash, or NWOBHM, or punk in the mainstream and then given the keys to an entirely new world, an entirely new way of life? It must be immeasurable.

That’s the true power of a subculture: it doesn’t just define an era, it can actually shape huge groups of people in truly profound ways, change their entire perception on life. Those communal kinds of events are becoming rarer. We still have a community – a brilliant community these days – and if you stand in a field when Amon Amarth are onstage at Bloodstock then you really will feel a collective sense of belonging that these are your people. But, in a society catered to celebrating your uniqueness, I can’t help wishing for more moments that celebrated our similarities. I like pop, hip-hop and indie too, and that’s fine – listen to as much music as you can! But I’m a metalhead first and foremost, and I’m happy to be defined as one. If you see me in the street gimme a nod, would you?