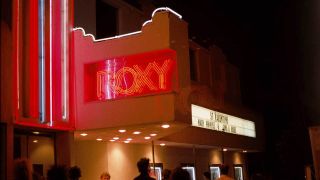 Not too long ago there was a billboard outside the Whisky A Go-Go for the TV drama Wicked City, that struck a chord in more ways than one. ‘In 1982 the Sunset Strip was killer’, it read. Obviously, this was in reference to the serial killing subjects of the programme, a couple of losers who don’t deserve the oxygen of publicity. But that light on the corner of San Vicente and Sunset takes forever to change, and sometimes you get to thinking…

The Sunset Strip probably was killer in 1982. That would have been around the time that Black Flag and Fear and Dead Kennedys would have been playing here. Probably Bad Brains, too, and certainly The Damned and The Misfits, there’s footage of that on YouTube, now you mention it. Indeed, a quick search brings up all manner of old flyers for that year: Killing Joke, Motörhead, AC-fucking-DC! And a little band called Metallica opened for Saxon at the Whisky, back in August of ‘82, which one imagines would also qualify as ‘killer’. There’s even three nights of Mötley Crüe, for those of you who were so inclined.

And that’s just at the Whisky! A stone’s throw up the road there’s the Roxy, and Lemmy’s home from home The Rainbow Bar And Grill, both of which would have been open for business in ‘82, and doubtless offering equally fine entertainment. “Table hopping at the Rainbow, babe,” as Mr Kilmister put it so voraciously on Motörhead’s_ Stone Deaf In The USA_.

But that light really does take forever to change…

In the ‘60s there were riots on the Sunset Strip after a strict 10pm curfew was introduced. There’s a movie about it, imaginatively titled Riot On Sunset Strip. Jack Nicholson and Peter Fonda showed up to protest (the curfew, not the movie, obviously), with Fonda being lead away in handcuffs. The hippy culture was in full swing, and The Doors and Jimi Hendrix and Led Zeppelin would have been at their absolute best, packing the Whisky back when it actually had go-go dancers. There’s a clue in the name. Lemmy’s neighbour, incidentally, used to be a go-go dancer at the Whisky; she’s a lovely old lady and has some incredible stories to tell.

The Sunset Strip has always been a place of incredible, sometimes almost magical stories. Did you know, for instance, that Marilyn Monroe and Joe DiMaggio met on a blind date at the Rainbow in 1952? And 30 years later John Belushi ate his last meal there, before overdosing on speedballs at the Chateau Marmont. By all accounts he was a regular on the Strip before his death, and even got up to sing with punk legends Fear a few times. Hell, even Elvis and Sinatra went to the Sunset Strip. In the rock ‘n’ roll world there is no other place on earth with quite the same mystique surrounding it as this mile and a half of shops, hotels, restaurants and clubs in West Hollywood. Not London’s Carnaby Street, not Haight Street in San Francisco, not the Bowery in New York, not even close.

When the light does finally change to allow pedestrians to cross, the little red hand will start flashing before you’re halfway across Sunset. It’s why there aren’t many old people in West Hollywood. But we digress… By the late ‘80s Guns N’ Roses and Mötley Crüe were kings of the Sunset Strip, all the big hair bands, Ratt and Poison and all that malarkey, Red Hot Chilli Peppers, Jane’s Addiction. Even Sex Pistol Steve Jones had a perm and a Harley! And then in the ‘90s there was System Of A Down and Rage Against The Machine packing out these small clubs with sweaty, excited people littering the sidewalk every night. What the fuck happened?

By the time you read this I will have moved away. Today the biggest band on the Sunset Strip is Steel Panther. And yes, they’re a good night out, and they’ve earned it, playing endless, endless club shows, but still. I’ve spent 15 years in Los Angeles, six of them in a place overlooking the Whisky and the Viper Room, hoping the revolution will once again be televised, gradually accepting that it might be over. The waifs and strays and lunatics have been largely replaced by tourists, and Lemmy no longer howls at the moon on a balcony at the Hyatt hotel, writing Motörhead at four o’clock in the morning. It’s called the Andaz now, no longer known as ‘the riot house’, and there are life-affirming slogans on the windows. Across the street, the House Of Blues has been knocked down to make way for another hotel, on the foolish assumption that anyone will want to stay there if there’s nothing to fucking do!

It’s likely that, once upon a time, the Sunset Strip lived up to its reputation, but the Key Club has gone now, too, and even the Hustler store is closing, and it seems as if those halcyon days are over. Which is not to say, of course, that the place doesn’t still have its allure, particularly if it’s pissing down with rain where you’re from, but like Soundgarden said, the grass is always greener… Doubtless you’ll see some great bands from time to time, but rarely any truly great shows, rarely a band at their peak, playing the kind of shows that keep you buzzing for weeks afterwards. Uncle Acid And The Deadbeats? That was a year ago, pal. Ministry and Revco? That was 2008!

So, what the fuck happened to the Sunset Strip?

There are those who will argue quite aggressively that it’s just as cool as ever, still the happening place to be. There’s a festival every year, after all. But it’s not really, is it? It’s a block party at best. With the bathroom window open – the one overlooking the stage – you can just about make out whatever shitty band is playing, or occasionally a good band going through the motions. Close the window and they’re gone. Pride, by comparison, is half a mile away, and makes the walls vibrate all weekend. SSMF, as it is known, is not a fucking festival.

And the Viper Room tries, bless them, they put on very decent shows, which makes this parting so much harder – like dumping that crazy ex. It’s not you, Sunset, it’s me. Rent has gone up, and those prices at the Roxy are outrageous. It’s just that I remember people dancing at gigs, and you don’t really do that much. It’s why Monster Magnet won’t play here any more, and that itself is reason enough for leaving. We can still be friends; I’ll come back and see you sometime to see if anyone’s beaten Lemmy’s high score on the games machine at the Rainbow and redeem that grubby drink voucher that always seems to be in the wallet. Now that the Rainbow’s reopened from the cockroach infestation and all.

I should probably just go now, Vegas is waiting…