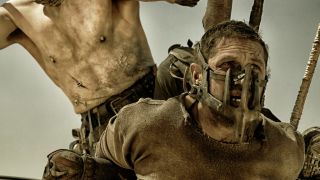 Mad Max: Fury Road is really sodding brilliant. It’s what action films should be – a distinct lack of CGI, a sparse storyline, a bunch of awesome bad guys, a badass hero and an absolute truckload (literally) of car chases, fight scenes and explosions.

It’s also metal A.F. Not for a while has a film so displayed a rock ‘n’ roll attitude as this one. Want to know why? WELL WE’LL TELL YOU THEN.

**1. Everything Is Made Out Of Metal **This is an easy thing to start with (and an obvious one – you don’t come here for subtlety though do you?), because everything in the film is basically made out of metal. There’s no wood or anything, apart from one tree, which one of the characters calls a ‘thing’. He calls it a ‘thing’ because there are no trees left. Hence no wood. Hence all the fucking METAL.

**2. Charlize Theron Has A Giant Cyborg Arm **She only has one normal arm, and so the other has been replaced by a huge robot one. It makes no sense whatsoever and would never work in real life, but how good would it be to have a deadly metal cyborg arm? It would be quite great, that’s how good (great) it would be. It would also definitely get you loads of attention down the rec centre. You might even kiss someone.

**3. Junkie XL Did The Soundtrack **Now, you’ll most likely know the name Junkie XL from that Elvis remix he did – A Little Less Conversation. You know, the one that was on that Nike football advert. Well, he now does film scores, and this one is GOT DAYM amazing. We can’t think of a dirtier, harder, more metal soundtrack in the past few years. And if you’re wondering about his rock credentials, he did production work on albums for Sepultura and Fear Factory back in the day. He was even in an industrial metal band called Nerve. Check out a song below:

**4. A Load Of People Drive Cars COVERED In Giant Metal Spikes **You know you’ve got that Korn sticker on your back bumper? Well, you might think it’s metal, but it ain’t shit on gigantic, deadly metal spikes protruding from every single angle of your car, is it? There’s even a spiked VW Beetle, which is about as bonkers as it gets (and in case anyone cares, which they don’t, is actually an homage to previous Ozploitation flick The Cars That Ate Paris. See, told you nobody cares).

**5. There Are A Hell Of A Lot Of Cool Masks **Nearly everyone has a mask on in Mad Max: Fury Road. There’s a load of freaks that look like Tusken Raiders from Star Wars and there’s a bunch of weirdos that basically look like Ratboy wannabes, but the best is the big bad guy, who has some sort of gas-cum-Predator mask with huge teeth on it. He looks the best. Although we wouldn’t take him home to Mum.

**6. Mad Max Is An Absolute BADASS **SPOILER ALERT: There’s this one bit where Max goes off head first into a load of nutters in cars, and all he’s got is a machete. About a minute later he comes back and he’s nicked all their weapons and killed them all. END OF SPOILER.

That’s a hard-arse thing to do, in case you were wondering. Also, like many a band, Max loves a bit of shouting and grunting.

7. Charlize Theron Obviously Likes Limp Bizkit Her character has a strange preoccupation with painting the top half of her head black. Wes Borland did this once – she must have seen it on TV or something.

8. Erm, EXPLOSIONS There are SO many explosions in this film. It rivals anything. We think it has even more than Fast And Furious 7 did, and that had A LOT. Basically, everything is an explosion and fire is everywhere. All the time. It’s also really loud. Loud explosions and fire. It’s basically like a Rammstein show, but with, umm, cars?

**9. There Are Skulls EVERYWHERE **Skulls = metal. That’s a given. The sheer amount of skulls on display here needs to be seen to be believed. You’ve got real ones, stone ones, mask ones and of course, metal ones. Mainly metal ones, come to think of it.

But the most metal thing about Mad Max: Fury Road is…

**10. THERE IS A WHOLE CAR MADE OUT OF SPEAKERS AND AMPS AND IT IS RIDDEN BY THE MOST INSANE GUITAR-SHREDDING MANIAC WE’VE EVER SEEN. DID WE MENTION HIS GUITAR SHOOTS FIRE? **It is ridiculous and amazing. He is suspended by chains, he wears a mask and he even uses his guitar to beat the shit out of people (with a guitar stab blasting out with each hit, natch).

Yes, correct, you are right – this man is the best man to have ever walked the planet.