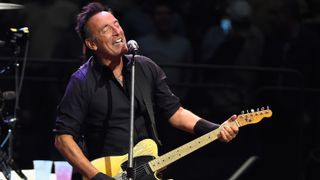 There’s missing the point and then there’s stumbling on a rock and blowing your own leg off. Much has been said about Bruce Springsteen’s recent move to cancel shows North Carolina in light of recent, transparently anti-LBGT legislation, popularly called the Bathroom Law, which is so dated and ill-informed it belongs at the British Museum.

Nowhere is the arrant short-sightedness and political complacency responsible for spawning such turgid and hateful bile better summarised than in BP Perry’s recent piece condemning the Boss for his move, or the comments by a North Carolina congressman that it amounts to “bully tactics”.

Is Springsteen punishing fans in the genuinely lovely state of North Carolina for the ills of their elected officials? No he fucking isn’t. Did the anti-Apartheid movement punish South African blacks or draw attention to their cause? What’s more important? The rights of the LGBT community or a few thousand Boss fans not having a good night out? (And on that note: where are the thousands of Springsteen fans berating him for cancelling? Was BP one of them? Did Bruce ruin your night out? Aw, bless.)

Here’s why Springsteen was right to do it:

1. It puts pressure on politicians
North Carolina voters devastated by prospect of explosively losing their shit to three hours of solid rock gold can turn to their state representatives and ask, ‘WTF?’ By inconveniencing his North Carolina fans he’s making it impossible for them to ignore the issues at play, and who knows – it may even sway their votes in the next state election.

2. It raises awareness of the issues
Like many, I had no idea of what plainly discriminatory political poison was being proposed in North Carolina’s state legislature until Bruce Springsteen slapped me in the face with it. Will I and many others be taking our holiday money to North Carolina on our next America excursion? Will captains of industry with a value system aim their business there? By educating people on the state of politics in North Carolina Bruce Springsteen has given all of us option to enact our own forms of active and passive dissent.

3. Bruce Springsteen is the Boss, and if his fans don’t like it they have the right to fuck off.
Bruce Springsteen is a genuine working-class hero and he has never chosen the easy or obvious political path. From championing the plight of Vietnam vets in a time when it was unpopular to do so with Born In The U.S.A. to raising AIDS awareness with the forlorn refrains of Philadelphia in a time when that horrible disease was so terribly misunderstood, it’s hard to accuse Bruce Springsteen of opportunism given how unfashionable his political stands have been.

We should not be criticising but applauding him for his courage – to suggest anything else is toxic and it is wrong. Go out and buy a Bruce Springsteen record today – after all, he’ll be eating the cost of his band and crew who won’t be getting paid for that show. I’d start with Nebraska – it’s left-field if you only know his popular stuff, but it may just blow your mind.