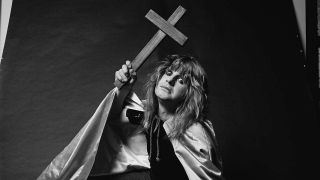 In October 1979, US rock magazine Creem ran a cover feature asking the provocative question ‘Is Heavy Metal Dead?’ Perhaps the magazine’s editorial team saw Kiss doing disco (with I Was Made For Lovin’ You) and Zeppelin embracing synths (on In Through The Out Door), guitarist Joe Perry walking out of Aerosmith and Black Sabbath firing frontman Ozzy Osbourne and concluded that the writing was on the wall for the genre. They couldn’t have been more wrong.

In the 12 months that followed, bolstered by the emergence of the New Wave of British Heavy Metal, metal was re-born, with the release of a clutch of albums that would come to be viewed as all-time classics. Come October 1980, Creem had rather revised its opinion of 12 months earlier, with a leather-clad Rob Halford fronting an issue boasting the cover line ‘Heavy Metal: Back From The Dead’. Here’s ten albums that promoted that U-turn… and made 1980 the best year in heavy metal history.

AC/DC – Back In Black

AC/DC connoisseurs rightly identify Powerage as the band’s finest hour, but Back In Black – the second biggest-selling album of all time, behind Michael Jackson’s Thriller – is their blockbuster production, and the greatest ‘comeback’ album of all time. Born out of tragedy, following the loss of the inimitable Bon Scott, here ‘DC consolidated all the commercial lessons learned with producer ‘Matt’ Lange on 1979’s Highway To Hell, and delivered 10 lean, mean masterclasses in breezeblock riffola, with new ‘boy’ Brian Johnson bellowing over the top like a man with his scrotum on fire. Magnificent.

The first six albums Sabbath recorded with Ozzy Osbourne may have created both the blueprint for heavy metal, and the standard by which all subsequent albums in the genre are measured, but there’s a strong case to be made for Heaven And Hell being the most consistent body of work Sabbath ever recorded. With Ronnie James Dio installed as Ozzy’s replacement, Sabbath were unrecognisable from the worn-out and weary unit who recorded the lacklustre Never Say Die, with Tony Iommi in particular a man re-born. “It really did feel like we were starting all over again,” the guitarist later admitted to Hammer. “And we all knew when the album was finished that it was something special.”

Def Leppard – On Through The Night

Def Leppard may have hit their creative peak when paired with ‘Mutt’ Lange for the slick, widescreen hard rock of Pyromania and Hysteria, but their debut album has a raw charm all its own. Recorded with Judas Priest producer Tom Allom when the average age of the Sheffield band was just 18, the spunky, spirited On Through The Night took the band’s key influences – Queen, UFO, Mott The Hoople, Thin Lizzy – and repackaged them with a youthful metallic sheen and punk rock snap. The birth of a British rock institution.

Diamond Head – Lightning To The Nations

The most under-rated band in this list, Stourbridge’s Diamond Head should, on the strength of their debut album, have been global superstars. A combination of bad luck, and ill-judged business decisions, ensured that it would take the patronage of Metallica – who freely admit that their early game plan was to sound like a mixture of Diamond Head and Motörhead – to truly secure the NWOBHM quartet a place in history, with Lars Ulrich’s hero-worship of the group leading to the San Franciscan band recording no fewer than four tracks from Lightning To The Nations (Helpless, Am I Evil?, The Prince and It’s Electric).

Steve Harris has long bemoaned Will Malone’s production on Iron Maiden’s debut album, but if the January 1980 recording sessions at Kingsway Studios didn’t fully capture the thrilling live energy of the East End band as the bassist intended, the strength of the songwriting here is undeniable, and still remarkable 36 years on. While Phantom Of The Opera, Running Free, Prowler and the title track are now rightly regarded as heavy metal standards, under-rated tracks such as the moody, atmospheric Strange World and Remember Tomorrow were brilliant early indicators that Maiden possessed a skill set far more developed than their enthusiastic NWOBHM peers. That Maiden could afford to leave off the fantastic Sanctuary from the album’s original UK pressing speaks volumes about their confidence in what remains one of the greatest metal debuts of all time.

With 1979’s live album Unleashed In The East a ‘greatest hits’ set in all but name, Judas Priest had effectively drawn a line under the first decade of their career, leaving them with a blank canvas as they began work in January 1980 upon what would be their sixth studio album. “You could feel that there was something really exciting about to happen to the band,” Rob Halford later recalled to this writer, “it was very tangible.” Written and recorded in just 12 weeks, British Steel typified the hunger, confidence and rising ambition in the resurgent UK metal scene, its mix of terrace choruses and razor-sharp riffs turning the band into Top Of The Pops regulars at home and a platinum-selling arena act in the US. Halford calls the album “magical”: he’s not wrong.

With the release of the brilliant Overkill and Bomber in 1979, Motörhead were on a hot streak and full of confidence when they began work on their fourth album in the summer of 1980. Lemmy’s band may have pre-dated the emergence of the NWOBHM, but their raw, ferocious punk-tinged rock n’ roll was perfectly attuned to this new climate. With fabulous understatement, in his autobiography White Line Fever, Lemmy noted “The songs on Ace Of Spades are considered classics by Motörhead fans, and I must say, they are an excellent bunch.” Lemmy may now have left us, but the likes of (We Are) The Road Crew, Jailbait and that deathless title track will ensure that that incomparable throaty roar will echo in our heads forever.

In the summer of 1979, Ozzy Osbourne was staring into the abyss. Kicked out of Black Sabbath, the singer was holed up in a West Hollywood apartment attempting to numb his pain with cocaine and spirits, convinced that this was The End. And then a young guitarist named Randy Rhoads entered his life, and everything changed: returning to England, the cleaned-up vocalist wrote Goodbye To Romance, Suicide Solution, Crazy Train and Mr Crowley with his new musical foil in a matter of weeks. When Sabbath’s label Warners passed on the album demos, Ozzy’s manager (and future wife) Sharon Arden convinced her father Don to release Blizzard Of Ozz on his Jet label. The album would go on to sell six million copies and establish Ozzy as an international superstar. “My ego loved it,” Ozzy recalled. “It was like ‘Fuck you, I told you I was right!’”

Saxon’s patchy 1979 debut album only hinted at the promise held by the Yorkshire quintet, with even frontman Biff Byford conceding “to be honest, it wasn’t very good.” Under pressure from their record company to deliver the goods, in 1980 the band stepped up to the plate, racing to the forefront of the NWOBHM scene with the release of not one, but two, landmark metal releases. Pound for pound, Wheels Of Steel just eclipses Strong Arm Of The Law, with the brawny Motorcycle Man, 747 (Strangers In The Night) and the chugging title track evergreen classics in the band’s set-lists to this day. Speaking about the album to Hammer ten years ago Byford noted “It’s obviously a classic. But, more than that, it saved our career.”

Bored and weary of having hits with souped-up cover versions of other artists’ songs, Eddie Van Halen approached his band’s third album with the intention of creating a heavier sound for the Pasadena quartet. This new attitude was evidenced in the album’s killer one-two opening of And The Cradle Will Rock… and Everybody Wants Some! and while the guitarist was far too melodically gifted to ever steer his band into pure heavy metal territory, the likes of Loss Of Control and Romeo Delight displayed a hardening of the VH sound. Ahead of the album’s release, motormouth vocalist David Lee Roth predicted that the new decade would belong to Van Halen, warning “we’re the youngest and the newest and we’re coming on real strong.” American rock critics may have hated his flashy, cocksure band and everything they represented but Women And Children First served notice that heavy music wasn’t going away anytime soon.

10 albums that prove 1986 was the best year for thrash