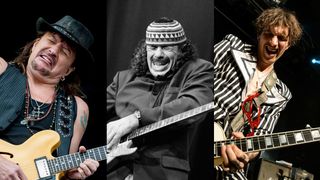 Yes, you guessed it – the latin rock guitar legend is explaining the, erm, idiosyncratic faces he is known to pull at the most intense moments of his solos. The technical term is ‘guitar face’, and although the web is full of picture listicles comparing them to men wrestling giant slugs or suffering schizophrenic episodes, very few leading fret-ticklers ever talk about it. it’s one of those things they just, well, do, and ours not to reason why. Maybe to pry into this curious phenomenon would be akin to Dorothy and friends peering behind the curtain where the Wizard of Oz creates his magical illusions.

But now and then, a six-string specialist does open up on the subject, and we backed up their observations with some more detached voices to try and paint a clearer picture of just what fuels the great guitar gurn.

“People should try to go deeper into the instrument, and transcend its actual construction,” Santana explained to Guitar Player magazine in 2005. “To do that, you have to make ugly faces, pucker up your butt, and get to that note. You need to put different levels of brutal freakin’ force behind your playing. The next thing you know, you start getting into the territory that Stevie Ray Vaughan and Jeff Beck inhabit. Let’s face it, Stevie made some pretty ugly faces. And, hopefully, so do I. Anybody who goes for the note, makes that face.”

So it’s about going for the note, as if straining every sinew to reach out for the holy grail that would otherwise be tantalisingly out of reach, right?

“Playing a guitar solo is a bit like doing a really hard poo,” says Richard Purvis of Guitar & Bass magazine. “There’s something powerful inside of you and you’re straining with great intensity, focusing all your energies to force it out. Why do some strain more than others? Partly because of diet, partly because of their whole attitude to the act of making music.”

John Mayer is one guitarist famously prone to the bulldog-chewing-a-wasp look, and he recently admitted, “I don’t mean to do it, [but] not only [am I] lost in the music, I’m worried about falling off the bike. It’s a pained sexual face.”

“It’s not just about looking like you’re on the brink of ejaculation,” reckons Justin Hawkins of The Darkness, “although there is a time and a place for that.

“As fans, we want to see some emotion. You don’t really believe a solo in a tender power ballad if the bottom lip isn’t quivering. If the guitarist is raising an eyebrow and winking at a girl in the audience, you’re not buying it. We expect blood sweat and tears from rock music, and tears are the guitar face element of that.”

There might also be an element of fear there too, as if guiding a mountain bike down a steep slope at high speed, requiring intense concentration, yet also producing an adrenalized, startled thrill at the feeling produced.

“Someone once said to me I looked generally taken aback at the notes I was managing to play,” laughs Hawkins. “Gasping, possibly in horror!

The worst thing is if you hit a bum note and you wince. But if you can style it out to own the bad note then it becomes a good note, and it’s all part of the orgasmic expression.”

Beyond the passionate abandon of a great note struck, facial expressions of a musician in full flight reflect brain, heart and body co-operating in the creative act.

“When I’m playing lead I’m singing in my head but It’s coming through my hands,” former Bon Jovi guitarist Richie Sambora told journalist Phil Sutcliffe a few years back. “I’m just not using my mouth. So maybe my face is part of the whole trip, that’s what’s going on.”

“My sister always asked me: why do you make those faces when you play?” said Gary Lucas, who played for Captain Beefheart’s Magic Band. He explained that “the strings have always seemed like an extension of the nervous system.”

He may actually have a point, judging by the limited but intriguing scientific research done on the subject.

Ethan Hein, music professor at New York University, explains: “Music cognition is distributed across the entire brain, including the motor cortex. You do a lot of abstract thinking with the parts of the motor cortex that also control your facial muscles, which is why people so often furrow their brows, stick their tongues out or chew on things when concentrating. You also think a lot with the parts of the motor cortex that control your limbs, which is why people sometimes need to pace or jiggle their legs. Performing music is very cognitively demanding, so it makes sense that you would want to be doing crazy things with your body while you do it.”

An Australian academic study in 2005, meanwhile, found that musicians’ facial expressions are an important method of conveying coded messages to the audience to enhance their emotional appreciation of the music. In a study by Macquarie University, listeners able to see the expression of musicians found the music had a considerably greater emotional impact. So maybe we need to see those faces as much as the musicians need to make them.

One of BB King’s wives compared his onstage expressions to the face he made when eating a lemon. But despite that, it’s by no means as unsexy as it may initially look. And that isn’t just a rock’n’roll thing either. Lucas recalled that as a kid, he noticed a look of faintly agonised ecstasy on the faces of the cellists in the New York Philharmonic. “He had a certain female section of the audience absolutely swooning,” he said.

“I made a conscious effort to stop it,” says Richie Sambora, “but even when I was doing videos, miming to track, standing out on the white cliffs of Dover or somewhere with the guitar not plugged in to anything, I still couldn’t stop. It just didn’t seem natural. I tried. I stood there. I was a fuckin’ stiff! If I stop that, I stop the whole flow from my body, I stop the whole emotional thing. It tripped me up.

“So I decided, I just can’t get out of this. And I just never gave a shit after that. If people thought I wasn’t good-lookin’ when I was doin’ it or I wasn’t sexy, girls didn’t dig it… Fuck you, man! That’s what I do.”

“It’s hard even to talk about it,” Justin Hawkins admits. “I worry that next time I play a solo I’ll have this conversation in my mind!”

Fair point – Professor Hein can confirm that suppressing the guitar face is undoubtedly a bad thing:

“If you divert some attention to keeping a straight face while you play, not only are you taking attention away from your playing, but you’re suppressing the very cognitive activity that helps you play.”

Anyway, isn’t this all just part of the show? The Darkness are even promising to include a guitar solo gurn-off at their fan convention in December, alongside other fun such as ping pong tournaments and karaoke. That surely reflects the fact that guitar face is now an indispensable part of the guitar god’s traditional stage persona. But should it really be just about show business?

“The problem is not guitarists who over-gurn, but guitarists who fake it,” says Richard Purvis. “Look at all those ‘80s hair metal bands – they would face-pull for hours at a time, but they weren’t striving to express anything; it was just theatre.”

That may be why some musicians prefer to project a slightly more rarified air, and that, according to Purvis, can lead them to adopt a separate kind of distinct, identifiable expression.

“A notable variety is ‘Prog Face’,” says Purvis. “Eyes closed with brows raised, head still or possibly rocking sideways slightly, bottom lip strangely sucked in. It looks sort of snooty, but I think it just comes from an awkward combination of the desire to grimace with emotion and the need to keep it together because what you’re playing is really, really fiddly. Richard Thompson’s been known to give good Prog Face.”

Oh, and it’s not just about solos, either. You think those beefy power chords just happen effortlessly, without any back-up from the facial muscles? No chance.

“A number of ‘70s guitarists,” says Purvis, “notably Jimmy Page, suffered from a condition known as Riffer’s Pout, which affects primarily the lips and is a mystery to medical science.”

Any musically minded medics out there, feel free to study it and let us know your results in due course. But if this brief exploration of the guitar face phenomenon has taught us anything, it’s that we shouldn’t get too hung up about the peculiarities of it all.

“The question for me is not, why do rock guitarists make weird faces, but why don’t all musicians?” says Prof. Hein. “Where did we ever get the idea that musicians are supposed to have blank faces? My guess is, European classical musicians in the nineteenth century absorbed aristocratic norms around emotional reserve, coolness, and restraint. We have come to associate those attitudes with a kind of vague “classiness.” Rock, of course, is supposed to be the opposite of classy, so rock musicians are more free to behave as comes naturally.”

But where does it all end? After all, the logical extension of fetishising such extreme expressions of artistic frenzy might not be quite so desirable.

““People can mock,” says Justin Hawkins, “but it’s hot under those lights - you could be having a stroke! I’m hoping that one day I’ll play a solo that’s so intense, everyone assumes I’ve had an aneurysm. That’s the goal when it comes to guitar face, isn’t it? The kids love it when we suffer!”

The 100 greatest guitar solos of all time