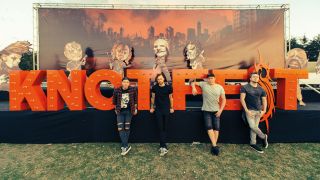 From the minute we touch down at Mexico City International Airport, it’s obvious Bullet For My Valentine are big news over here. We’re immediately mobbed by fans, some already known to the band, who clamour for autographs and hand over gifts of whisky and knitted dolls of each member. We’re here for Knotfest Mexico, where Bullet are playing the main stage, and local fans are stoked for the band’s return to the country. Whatever happens over the coming days, it’s not gonna be a quiet one…

10am: We wake up in the five-star Camino Real hotel, in Mexico City’s Santa Fe district, having finally slept off the brutal jet lag from the 11-hour flight. There’s no time to lounge around, though – everyone’s up and preparing for the day’s press call.

11am: Guitarist Mike ‘Padge’ Paget, perturbed by his split ends, takes a trip to a local barber. The rest of us – minus Matt and bassist Jamie Mathias, who are sleeping in – pass the time in a local shopping centre until it’s time to head to Rolling Stone México’s offices for a Facebook Live chat.

11.30am: “Does anyone feel a bit weird?” asks drummer Jason Bowld, and we all agree that we feel uncharacteristically out of breath. This, we establish, is altitude sickness: Mexico City is more than 2,000 metres above sea level, which is enough to make you feel a bit odd if you’re used to the lesser heights of Blighty. Jason might be the newest member of Bullet, having replaced Moose Thomas, who left due to family commitments, but thankfully he’s well accustomed to touring, having previously played with Pitchshifter, Killing Joke and Matt Tuck’s side-project, AxeWound. His position in the band has been upgraded from touring member to permanent, and the new record will be the first he’s appeared on.

12pm: A fan who looks like he could forge a career as a Matt Tuck-circa-2007 lookalike is waiting patiently in the lobby with a stack of CDs for signing. But the enigmatic frontman hasn’t emerged yet; he doesn’t appear until it’s time to leave for Rolling Stone.

12.30pm: Padge returns from the barbers, where it turns out he wasn’t the first celebrity visitor. “He said he had another band in earlier, and that he’d show us a picture on his phone,” says band manager Ryan. “But when we looked at the picture, it wasn’t a band… it was a big old vagina!” As you do…

1pm: Padge is more concerned by his haircut than the barber’s X-rated photo collection. “I look like Lord Farquaad!” he exclaims, sporting a new bob that does bear a passing resemblance to that of the diminutive ruler from Shrek.

1.30pm: We pile into the van and the potholes in the road do no favours for everyone’s mounting altitude-induced nausea. There’s no time to rest after the interview, either: it’s almost soundcheck time, and after a swift half-hour window to eat or nap, we’re back in the van.

5pm: The festival site, Foro Pegaso, is an outdoor event space about an hour outside of Mexico City. As we head into the countryside, the roads get bumpier and the scenery turns from plush high-rise offices to colourful shanty towns.

5.45pm: “It looks like a military base!” exclaims Jason, as we drive down a dirt track to the site and notice, with some trepidation, that the stage is still being built.

6.30pm: After soundcheck, a label rep invites us to a Mexican wrestling show that night. Unfortunately, the altitude sickness has got the better of us all and we opt for an early night. Dammit, we hate being sensible.

9am: That good night’s sleep didn’t exactly go to plan. A group of fans had found out our room numbers, and decided to order room service as a prank. Cue 1am phone calls all round from hotel staff wondering about the sudden late-night urges for pizza.

11am: There’s another hitch when we get news that Carlos, a videographer who’s coming to film an interview, is stuck on the road somewhere outside Mexico City because a sinkhole has opened up (well, it beats Tube delays as an excuse…). It’s our job to scope out a location for the video while we wait for him. The rooftop bar is too noisy so we decide on the tour manager’s hotel room and make ourselves busy rearranging the furniture while the tour manager blow-dries his hair with one hand and emails with the other.

1pm: Talk turns to the new album once Matt and Jamie arrive. “I want to challenge myself as a songwriter – I don’t want to do things that are stale or boring. We don’t just want to make the same record over and over again,” says Matt, determinedly. He won’t be drawn on any further details, though. Trust us, we tried. “This one’s a bit more personal for me – I think a lot of things will be self-explanatory once the fans hear it,” he adds, cryptically. He is, offstage, the most guarded member of the band. While the others loudly swap jokes after a beer or two, he talks in the same measured tones, seldom joining in when the conversation turns to our everyday lives. It seems like a mixture of aloofness and genuine shyness, but he visibly perks up during music chat. He says the album has no title yet, and we later joke with Ryan that ‘Bad Altitude’ might make a good name.

2pm: Finally, Carlos arrives – thankfully unscathed from his encounter with the sinkhole – and the video interview goes without a hitch.

3pm: Now, it’s showtime. The effects of altitude sickness are wearing off, and everyone’s in higher spirits as we head to Knotfest. Jason entertains himself by playing Countdown on his phone, Matt gazes out of the window and Carlos explains why events like the Slipknot-curated festival are so important for the Mexican metal scene. “It’s hard for Mexican bands to break out of the local scene playing to 50 people,” he says. “There isn’t a Mexican equivalent to Metallica – no local band has got that big. But things like this give local bands the chance to support the big international names people want to see.” He pauses. “But they’ll be back playing to 50 people next week!”

4pm: Speaking of Slipknot, we ask if the Bullet boys are pally with the masked Iowans. “Well, we toured with them, but Clown didn’t speak to me for the whole nine weeks!” laughs Padge. Turns out it’s nothing personal: Clown later tells Hammer that he thinks Bullet are “great guys”, and we catch him watching their Knotfest set from the side of the stage.

6pm: There’s rapturous applause as Bullet take the stage. From the anthemic You Want A Battle? (Here’s A War) right through to the encore, latest single Don’t Need You, the crowd know every word.

6.45pm: “Phew, I thought I was going to faint!” pants Jamie as the band celebrate a successful performance – despite altitude sickness – with some dressing room beers. “I kept looking down and feeling really dizzy.”

7pm: We’ve got a couple of hours to kill before our ride back to the hotel, so the band head into the arena to watch Stone Sour, who are next on the bill. Then it’s Korn – with Jonathan Davis sporting a metallic kilt – and headliners A Perfect Circle, but our bus call means we have to miss them, much to our disappointment.

10.30pm: By the time the bus arrives, everyone’s really flagging; there’s talk of an afterparty in the hotel bar, but Matt, Jamie and Jason head straight to bed. Padge and Hammer decide to go for a drink, but after Cannibal Corpse bassist Alex Webster regales us with tales about his extensive guitar and gun collection for almost an hour, we also call it a night.

8am: It’s an early start for Jamie, Jason, monitor technician Pete, Ryan and Hammer, as we squeeze in a bit of tourism before our evening flight home. We’re off to the pyramids at Teotihuacan, an ancient city ruin north of Mexico City. “Jase and Jamie are always the adventurous ones,” laughs Ryan. “If anyone wants to go out and do stuff on tour, it’s always them.”

10am: While Padge has a lie-in and Matt catches up on the new series of Stranger Things, the rest of us listen to our tour guide, Manuel, as he gives a brief rundown of life in Mexico City, which is remarkably business-as-usual given September’s earthquakes. “The old, sturdy buildings were fine,” he says. “It was the cheaper, adobe-style ones that were damaged. But the government doesn’t invest enough in the infrastructure. They’re corrupt – nobody voted for the current president [Enrique Peña Nieto], but he still got in!”

10.30am: The city once again gives way to favela-style settlements; this time, a brightly coloured sea of houses that covers the hillside. We stop off at a gift shop – and are treated to a complimentary 10am tequila shot – before reaching the imposing Pyramid of the Sun. Jason buys himself a jaguar-shaped whistle from one of the wandering salesmen around the pyramid.

12pm: “I’m going to sample this and get it on the album,” he laughs, blowing into it and making a chilling, throaty roar for the umpteenth time. After an authentic Mexican lunch in a restaurant with its own in-house mariachi band, it’s time to go back and pack for the journey home.

6pm: Once again, the fans are waiting at the airport, bearing gifts and asking for selfies. Hammer is sent on one last mission: to find a pub to sit in until we can board the plane. It’s a task we feel qualified to undertake. Bullet may have done two 11-hour flights in the space of three days, but going home doesn’t mean it’s time to rest. A week after we land, it’ll be time for them to start recording the album. If it ends up with the title ‘Bad Altitude’, you heard it here first…

Bullet For My Valentine are due to release their sixth record in May via Spinefarm. They will play Download festival in June

Bullet For My Valentine: Album no.6 will take a lot of people by surprise

Bullet For My Valentine's Matt Tuck: My Life Story

Every Bullet For My Valentine album, ranked from worst to best