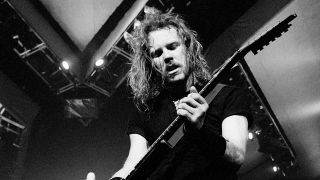 Picture this: It’s August 1992 and Metallica are on a high, touring the Black Album, the record that would send them into the commercial stratosphere.

The band are crossing North America, co-headlining a travelling festival that’s monolithic in scope and style, accompanied by the day’s other hard rock behemoths, Guns N’ Roses. The 55,000 capacity Olympic Stadium in Montreal is sold out, and an expectant crowd have no idea what's about to unfurl in the following hours.

Earlier, the band’s crew briefed the band on the evening's pyrotechnics. They've decided to increase the number of half-pound aluminium powder charges used during the performance, situating the explosives at the front of the stage as well as on its outside wings.

And a dozen songs into their set, frontman James Hetfield steps into a 12-foot high torch of fire.

As Fade To Black builds, Hetfield is suddenly unsure of his stage position as huge, fiercely hot plumes of coloured flame burst into life around him. He walks tentatively forward, and then takes a step back.

“I’m a little confused on where I’m supposed to be,” he’ll say later, speaking to VH-1’s Behind The Music. “And then pyro guy doesn’t see me, and ‘whoosh!’, a big coloured flame goes right up under me. I’m burnt. My arm, my hand, completely down to the bone. The side of my face. Hair’s gone. Part of my back. I watched the skin just rising, all these things going wrong."

Lars Ulrich looks on from his drum riser, later recalling that Hetfield was "completely engulfed" by flames burning with 3200-degree heat (akin to the combustion temperatures used to propel rockets).

Luckily, as the full force of the flame hits, Hetfield is wearing his double-necked guitar, which deflects some of the flame to the left side of his body. His arm and hand are seared, his eyebrows sudden wisps of smoke. He falls and rolls across the stage floor in attempt to defuse the flames, and in the confusion the rest of the band stand frozen in place.

As bassist Jason Newsted told People magazine: “If he had been breathing in, he would have been dead.” The band’s bass tech Zach Harmon remembers, “I ran over and saw him holding his arm with his skin coming off.”

With the set cut short and Ulrich explaining the situation to a bemused (and confused) crowd, Hetfield is hustled backstage, waiting for his ride to the hospital. As crew and security bustle around him, someone accidentally brushes up against the singer and bumps into his burnt hand. “I remember I just lost it,” recalled Hefield. “I screamed and punched him right in the nuts!”

It would be hours before the band would know the full extent of their singer’s injuries. Rushed to hospital in a crew van, Hetfield was discovered to have suffered deep second-degree burns on the back of his left hand and second-and third-degree burns on his arms.

"I was in shock," he recalled. "The nerves felt like they were exposed. My hand looked the worst. It bubbled up in two layers that came off."

Doctors cut the remnants of his clothes off, sawed the ring off his left hand, and sated the singer’s agony with morphine. “It was pretty much the worst pain I've ever felt,” says Hetfield.

Back at the stadium, Guns N’ Roses – never a band to pour oil on troubled waters
– refused to bring their stage time forward to help compensate for Metallica’s straitened set. When they finally took the stage, two hours after Metallica had finished their show, they managed a scant nine songs before an irate Axl Rose abandoned ship, citing a faulty sound system and telling the crowd: “In case anybody here is interested, this will be our last show for a long time.”

The crowd, no doubt feeling a little short-changed by the evening’s events, began to riot, overturning concession stands and setting fire to garbage cans, before spilling out into the city’s streets, torching cars, overturning a police cruiser and even uprooting a street lamp.

Damage was estimated at $400,000 US, with ten people injured and at least half a dozen people arrested. And, as if to add insult to injury, the remaining members of Metallica found themselves held backstage for their own safety, nixing any idea of heading to the hospital to check in on Hetfield. They finally made it back onto Montreal’s subdued streets at 4.30am the next morning.

Released from the hospital a day later, Hetfield began painful daily 90-minute therapy sessions in which his wounds were cleansed and dressed, with therapists putting him on an exercise program to help him regain movement in his nerve-damaged arm and hand.

He was back onstage in Phoenix, albeit on vocals only, 17 days after the accident, when Metallica resumed its tour with stand-in John Marshall on guitar.

"When I went back for the first time and those flames went up, my heart raced," he told People. "It's like when you're a kid; if something scares you, you go do it anyway. I learnt from it. It’s the Metallica way."