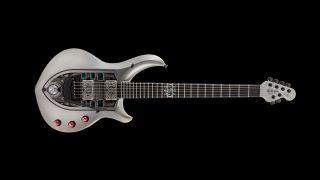 Music Man guitars, based in California, could be described as ‘what Leo Fender did next’. After he sold the company that still bears his name to CBS in 1965 for a reputed $13 million, he set up the Music Man brand in the early 70s. These days the list of MM endorsees is as eclectic and diverse as it’s always been and includes Steve Lukather, Brit legend Albert Lee and the gloriously left-field St Vincent.

However, the player with the most MM models is Dream Theater’s John Petrucci. And among his new range of Monarchy Series Majesty guitars is this, the NOMAC Majesty. MM designer Drew Montell has taken the character of the NOMAC from Dream Theater’s latest concept album The Astonishing as the inspiration to produce something truly special, and production is limited to just 20 instruments worldwide.

The mahogany body features a maple top and a gorgeous through-body Honduras mahogany neck, all clad in an exclusive Timeworn Silver finish. Each of the guitar’s three custom red aluminium control knobs is topped with a 5mm rose-cut black diamond set in 14k white gold, while the anodised aluminium medallion behind the bridge includes a trio of Burmese spinel rubies also set in white gold. There’s also a sextet of ‘omniscient eye’ acrylic screens framed in hand-shaped stainless steel, and a 15-piece abalone fingerboard inlay set too. Stunning.

Pickups comprise a pair of Petrucci’s signature DiMarzio Sonic Ecstasy humbuckers, complete with laser-cut NOMAC covers, and like most of his guitars, the bridge also incorporates Piezo acoustic saddles.

The NOMAC Majesty’s super-exclusivity will most likely mean that no examples will make their way over to the UK officially, but if you can find one somewhere, you should expect to part with around £10,000. An astonishing price but, chillingly, probably worth it.

More info on the Monarchy Majesty range from www.music-man.com.

From covering it in everything from emulsion to diamonds, guitar decoration is an established pastime.

All sorts of materials have been used to embellish guitars, from magic markers and stickers to fossilised mammoth ivory and precious gems. For the ultimate in jewel-encrusted silliness, take Gibson’s Eden Of Coronet SG. A collaboration between Gibson and jewellery designer Aaron Shum unveiled in 2015, it was at the time the world’s most valuable guitar. With over 1.5kg of 18k gold and studded with Coronet diamonds, it had an estimated worth of around $2 million.

Sometimes, however, legendary status can be attained by merely applying a lick of paint. That’s the case with The Fool, a Gibson SG used by Eric Clapton (pictured) most notably during Cream’s Disraeli Gears 60s period. Dutch artists Simon Posthuma and Marijke Koger (collectively known as The Fool) painted the guitar’s entire surface, and the hippie-trippy designs are emblematic of that simpler time.