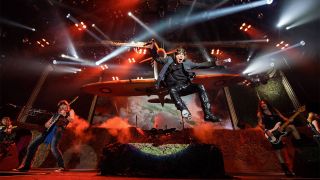 Iron Maiden's Legacy Of The Beast tour is nothing short of epic. The setlist alone is enough to send our tiny metal-addled brains into spasm, but the production is like nothing we have ever seen before. Sure, we know the mighty Iron Maiden love to bring the big guns, but this tour is just silly. Planes, pyro, flamethrowers, Eddies, even bigger Eddies... this is just a taste of what you're in for when the Legacy Of The Beast tour rolls in to town.

Here we break down the mind-blowing show into its vital parts, frothing at the mouth as we type.

First unveiled as a fog-ridden, smokey battlefield covered in army-grade camouflage netting, the stage evolves as the show goes on – first into a luscious, stained-glass chapel, and then an ancient, demonic vision of Hell. Lovely.

The first and, arguably, biggest new addition to the Iron Maiden set. Coming flying out of the back of the set and swerving over the stage for Aces High, this is one you really have to see to believe. Dave insists it’s “so big you can get in it”.

Seriously, there’s enough fire and sparks going on here to make Rammstein look twice. Stand too close to this Maiden set and we promise you there will be singed eyebrows come bedtime.

Brought onstage by Bruce during Hallowed Be Thy Name (when else?), this delightfully cheerful little prop is so at home in the Iron Maiden set it’s a wonder it hasn’t made more appearances over the years.

Arguably the most iconic Eddie of all makes a reappearance in the song of the same name, and he’s looking particularly grim and battle-trodden this time around. He still likes a good swear, though. The cheeky fucker.

One of Bruce’s more cumbersome props, it looks pretty damn badass as it lights up while he stalks the stage with it during set highlight Sign Of The Cross.

Maybe the coolest extra detail in the whole set. A towering, winged figure straight out of Greek mythology looms over the band as they fly through Flight Of Icarus. Though it’s very much in danger throughout the song thanks to a marauding Mr Dickinson, who happens to be packing…

Yup, you heard right. Someone decided to greenlight the idea to let Bruce Dickinson bound around onstage with two giant flamethrowers attached to his person. Well, we did say they’d gone Full Rammstein with this one…

Best Eddie Ever? It’s got some stiff competition, but our favourite definitely-not-a-zombie-mascot has been given such an extreme, satanic makeover that he’s almost unrecognisable. It’s easily the most metal Eddie ever, and it looks immense in the flesh.

Honestly, start a drinking game based around every time Bruce has a costume change and you’ll be bladdered by halfway in. We won’t spoil them all, but our favourite is his rather excellent, top-hatted Fear Of The Dark set-up. Spooky.

Iron Maiden are on the cover of this month's issue of Metal Hammer – available in shops now and via our own online store.

There is also a world exclusive Iron Maiden Legacy bundle with an exclusive Pharaoh Eddie patch and a limited edition Legacy Of The Beast figure.

Iron Maiden's Legacy Of The Beast tour wraps up in Europe this summer. Dates below: