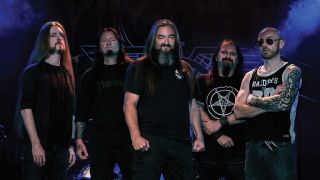 Taking its name, and inspiration, from the Underground Titans Tour that took place back in 1992, Titanfest is returning to the Dome in Tufnell Park, London on November 19 for a second showcase of classic, generation-spanning heavy metal.

Building from the success of the first last year’s inaugural event that featured the likes of the Mantas-fronted M-Pire Of Evil, The Heretic Order and One Machine, this year’s festival will feature 15 bands across two stages, and we can exclusively announce that it will be headlined by famed, furious and indestructible thrashers Onslaught.

The bastions of Bristol will be celebrating the 30th anniversary of their classic breakthrough album The Force, and specifically requested that Titanfest be scheduled for November so that the album could be celebrated in style.

“Onslaught are super-stoked to be headlining Titanfest 2016,” says guitarist Nige Rokett. The lineup for this year’s festival is really cool, lots of diversity but with one common theme: Great British Metal. We’re looking forward to another awesome show in London!”

More bands will be announced over the coming weeks, but Titanfest looks set to become an epicentre for old-school, hard-partying heavy metal and tickets are onsale now, at an early bird price of £26.66, reduced from £30, and can be snapped up at the official website, www.titanfest.co.uk.

Titanfest takes place at the Dome, in Tufnell Park, London on November 19. Check the Facebook page here, and may The Force be with you!