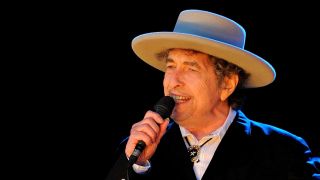 I have always wanted to die in the desert. Seems like a good place for it, mummifying into used leather under a merciless sun while vultures pluck out your eyes like fat grapes. For a dude who’s spent his whole life with his feet striking concrete in a crowded city, it seems like a noble end. Nature finally wins out.

In fact, whenever I go to Tuscon, one of my favourite vacation spots, I like to wander around in the desert and have my wife take photos of me splayed out among the cactus, face-down, just so I can see what it would look like. My “Dead in the Desert” series. She really hates it. But now it looks like Bob Dylan has the same idea. And I don’t know if the desert is big enough for the both of us.

Rock’n’roll is shrivelling into complete and utter irrelevance and while it is not Desert Trip’s fault, the senior citizen-clogged festival is certainly adding insult to injury. One of the clearest signs that you’ve lost the plot is when older folks start to mimic whatever it is their kids are doing in a fitful attempt to seem “with it”. The ‘kids’ have been going out to the desert for the past decade or so to participate in Pagan rituals like Coachella and Burning Man, where they listen to their bullshit music and do their bullshit drugs and have bullshit sex with each other before coming back home to stare at their phones for 22 hours a day.

I’m sure the first few years of these monolithic festivals were authentically mind-blowing experiences, but it’s just like anything else, sooner or later news trickles out to the suburbs and before you know it you’re overrun by ordinary fucking people jostling for elbow room and demanding mainstream entertainment for their dumb mainstream brains. I’m 46, I’m not supposed to know who any of the bands at Coachella are. That’s part of the fun. But I sure the fuck know who Guns N’ Roses is. So clearly, Coachella has jumped the proverbial shark.

But now that that door has been wedged open, why not capitalise on it? Why not make a desert-bound fest just for us, the Baby Boomers and the obedient Gen X’rs who forgot about punk rock and just went back to Steely Dan? We deserve to bake in the sun and listen to our bullshit music and probably not do our bullshit drugs and definitely not have our bullshit sex too. And so Desert Trip, AKA “Coachella for old people”, featuring Paul McCartney, Neil Young, The Who, Bob Dylan, Roger Waters and The Rolling Stones, coming this October in Indio, California.

Of course, some aspects have to be tweaked. They’re not actually gonna play in the desert. The concert is at a polo club, for chrissakes. And instead of wandering around eating food on a stick, there will be sit-down dinners presented by award-winning Los Angeles-based chefs. There’s also fully-furnished safari tents if you’re brave enough to stay on site or air-conditioned shuttle buses to take you to and from your hotel room if you’re not. And if you need your weekend jeans ironed, I’m sure there’s somebody to do that for you.

I realise that there’s some cache or bragging rights to “being there”, but in this case, there is really nowhere. Oh really, you saw half of The Who in 2016, forty years past their prime? And you only paid $699.00 for a ticket? I know a guy who got kicked in the head at a Ramones show at the Rat here in Boston in ‘78 and he’s still got the scar above his eye to prove it. I loaned him $4.00 for the subway the other day. That guy is way cooler, man.

Remember Land of the Dead? It’s probably George Romero’s worst zombie movie, but it takes place in a luxury apartment house where rich people party while the recently-deceased eat the living outside its walls. The rich are already dead, they just don’t know it. That’s Desert Trip. Rock’n’roll will continue as a bourgeois nostalgia trip catering only to the aged and moneyed until everybody from the Classic Rock era is either dead or retired, and then it will be over, completely.

The music industry as we knew it in the ‘60s and ‘70s imploded because it would not listen and adapt to the young, who were adopting new technologies and creating and consuming music in new and innovative ways. So in its efforts to stop the haemorrhaging, it abandoned the youth vote altogether and now spends all of it’s time and effort into making you buy Dark Side of the Moon over and over again in different formats, this time at a fucking polo club in the desert. And if we go, we’re gonna die out there, man. Not in a cool way, with rattlesnakes nesting in our bellies, but in the worst way possible – but by getting old. Old, boring, irrelevant, out of ideas. The one thing we swore we’d never do.

Opinion: Paul McCartney, the Stones & Dylan at Desert Trip? The best idea ever