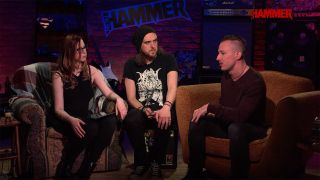 We have recorded three pilot episodes for a regular show coming in 2019, and we want to hear what you think at metalhammer@futurenet.com so that we can make the show you want.

The first two episodes are available to watch now below.

The third and final pilot episode of Metal Hammer TV is brimming with heavy goodness as The Black Queen's Greg Puciato joins us in the studio for an exclusive interview.

We also chat to Doro about her humble beginnings in metal, bring you highlights from the Hammer Podcast, unbox the Dimmu Borgir Eonian vinyl set, chat about Tom Morello's new album and much more.

For the second pilot episode of Metal Hammer TV, we have an exclusive interview with Nergal from Behemoth and get a guided tour around Asking Alexandria's tour bus.

Plus, JJ Peters Of Deez Nuts talks us through five of his favourite hardcore albums, we unbox Helloween's Starlight: The Noise Records collection vinyl box set, go behind the scenes of the Metal Hammer podcast, and there's new music from New Zealand's Alien Weaponry.

In the very first episode of Metal Hammer TV, we have an exclusive interview with Lzzy and Arejay from Halestorm, plus new music from Raw In Sect.