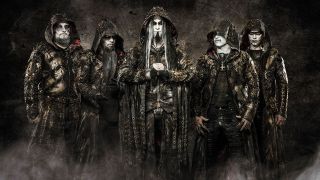 The most commercially successful Norwegian black metal band of the lot, Dimmu Borgir have always aimed higher, thought bigger and sounded more overwhelmingly epic than any of their contemporaries. Even now, as they return from an eight-year gap between albums, founder members Shagrath (vocals) and Silenoz (guitars) are brimming with confidence and pride as they prepare to unleash their long-awaited 10th full-length, Eonian, while also being very much not bothered about what people might be saying about their prolonged absence from the scene.

“From the outside it probably looks like we haven’t done shit for several years!” Shagrath laughs. “The last show we did was at Bloodstock in 2014, and then we made a decision to have a low profile and just concentrate on the new record, which we’ve been working on for many years.”

“We’ve never been a band that can be in creative mode while we are on tour,” adds Silenoz. “Because it requires so much of our attention, when we put songs together. So we did have a break in 2014 and we focused on other stuff, our families, other projects. Also, it was important this time to not have a deadline or have anyone push us in a certain direction. It was more about shutting off the world and digging deep into ourselves. After all this time, we know what we want…”

“…and we know what we don’t want!” adds Shagrath, as they both burst into fits of laughter.

“We take pride in our heritage, from the early 90s that we sprouted from in the beginning,” says Silenoz. “But we’ve always been an underdog on the sidelines and now we’re getting so old that we have no more fucks to give!”

Although many noted metal musicians have passed through Dimmu Borgir’s ranks – longtime bassist ICS Vortex and keyboardist Mustis left in 2009, in a significant a shake-up – the creative core of the band has long been Shagrath and Silenoz (with all respect to loyal second guitarist Galder, of course). Not surprisingly, for childhood friends who have spent the majority of their lives in close proximity, they have morphed into a highly effective double act; finishing each other’s sentences, setting each other up for punchlines and generally bouncing off each other in the way that only the closest of friends do. Similarly, the songs on Eonian speak volumes about the creative harmony the Norwegians have jointly nurtured, while the album’s title (which means, in essence, eternal or forever) feels like a subconscious nod to what both Shagrath and Silenoz regard as a neverending quest for artistic perfection.

“When you start a band, you’re not certain about the direction you want to take it, but as time goes on you learn where you want to go and you become better at what you’re doing,” says Silenoz. “We’ve always had a really good work ethic and dynamic between us. We’re very different as people, but we share the same view on the sacrifices you need to make to be in a band like this.”

Although very much a united front, Silenoz and Shagrath are noticeably distinct characters: the former is straightforward and thoughtful, the latter more acerbic and brash. It’s clearly a formula that works.

“…and the discipline! That’s really important, too. But as you grow as an artist, you’re closing in on the portal, basically,” says Shagrath. “You know that the journey isn’t going to be perfect, but you try to get as close as possible to that goal, working with whatever you have. That’s not something you see when you’re 18 and making your first album.”

There is no denying that Eonian loudly proclaims its creators’ meticulous attention to detail. Even by Dimmu’s extraordinary standards, the new songs sound almost comically huge, as Silenoz’s trademark spidery refrains and thunderous riffs underpin all manner of extravagance, from elegant orchestral flourishes to a full choir. While both one of the band’s heaviest and most accessible records, it also seems to be their most thoughtful and complex, as Shagrath moves ever further away from the early black metal scene’s myopic, dogmatic approach to lyrics. Instead, Eonian appears to draw from the frontman’s own interest in Luciferian philosophy, wherein Lucifer is regarded as a guiding spirit and liberating force.

“For me, when I write, it’s important to be less and less conclusive these days,” he notes. “In the past, it was much more about being straight and direct, but these days it’s way more questioning. If you want to relate that to Luciferianism, that’s what it’s all about – to find your own light in all of this. I think it’s important to say that we, as with many black metal or extreme bands, take pride in the Luciferian figure. He said, ‘Fuck you, dad, I’m out of here! I’m not taking this shit anymore – I want to follow my own light and give that light to others…’”

“Musically speaking, this type of music is something you can dive into,” adds Silenoz. “It’s a world of its own, an escape from reality. I think that’s needed now, more than ever, when you see what’s going on around us.”

Listening back to Dimmu Borgir’s previous albums, you may wonder how they managed to keep upping the sonic ante with every next step. Certainly, Eonian upholds that fine tradition, with a production job (courtesy of Shagrath and Silenoz) that once again gleams with cutting-edge potency. But beyond the new record’s impressive aesthetic values, it’s the thrilling ingenuity of the songs themselves that marks Dimmu’s 10th album out as potentially their finest yet. One notable change from earlier albums is that Shagrath appears to do a lot less screaming on Eonian: a simple decision, he insists, inspired by lessons learned.

“For me, it’s all about the feeling you get from certain riffs. A song is like a journey and it would be absolutely no challenge if I just screamed my way through it. I looked back at some of the previous albums and what I learned was that sometimes there was too much singing! You have to pay attention to each sentence, each word, maybe change something small to make the whole thing more powerful, so it means more. It’s a complex process, even before you start recording the vocals.”

“I think Shagrath has become a lot more experienced in arranging the vocals and that makes the songs much stronger,” Silenoz states. “One of the beauties of this band is that he plays keyboard and guitars and he’s a songwriter, too. To have a vocalist say that he wants to step back from the vocals to make room for the music… well, you normally get the opposite situation! Ha ha!”

Twenty-three years after the release of their debut album, Norwegian black metal’s greatest success story are 100% ready and prepared to launch their latest assault on the metal world. If the shows in support of Eonian reflect the album in any way, they will be eye-frazzling, hyper-gothic spectacles belched directly from hell’s depths, the full six-man Dimmu live lineup firing on all infernal cylinders. Still aiming higher, thinking bigger and doing it all with more punch, pomp and power than anyone else, they are back at full strength and still in a class (and world) of their own.

“We’re the type of band that never asks for permission,” Shagrath avows. “We always do what we want to do, at any given time. I guess you could say we’re some kind of rebels within the rebel community, so to speak, because we refuse to follow orders or unwritten rules. It’s all or nothing for us.”

“We’ve never made it easy for ourselves, put it that way,” laughs Silenoz. “It all comes down to how you prepare. Sometimes you do think, ‘Why didn’t we just do this as a three-piece?’, you know? It’s like a circus on wheels.”

Dimmu Borgir's new album Eonian is out now and available to order from Amazon or from HMV.