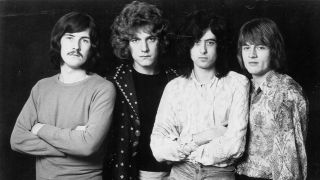 Upon forming in 1968, Jimmy Page, Robert Plant, John Paul Jones and John Bonham took their name from a supposition from Keith Moon that their band was destined to go down like a ‘lead balloon’. Their manager Peter Grant’s lack of confidence in the record buying public’s pronunciation skills, allied to an innate instinct to think big, translated his withering sarcasm into ‘Led Zeppelin’.

Moon was wrong, of course. Before you could say ‘swiftly signed to Atlantic, relentlessly toured’, they were the World’s Biggest Band that, for some reason, nobody you knew had ever seen on television.

Then, in 1980, it all came to an end. Following Bonham's sudden death in September that year, the group decided to disband, confident they "could not continue as we were". There have been reunions since – only four, though – including the ill-fated Phil Collins Live Aid debacle and their triumphant Celebration Day reunion, and a number of solo projects pursued. Still, none of it's come close to matching what those four people were capable of creating together in their prime.

During those 12 years together, Led Zeppelin recorded and released 107 songs. Within those 107 lies the fabric of rock'n'roll as we know it. But when it comes to sorting them in order of greatness, it's a nigh on impossible task. That's where you come in. From the crowd-pleasers to the deep cuts, every fan will have their own personal favourites – which is why we're placing the final decision in your hands.

Each of Led Zep's 107 officially released songs are included in the list below. We elected not to include the unreleased tracks or super obscure bootlegs, but we've left a field open for your suggestions in case you feel compelled to cast your vote there. Everyone gets three votes each, so scan the list thoroughly and make 'em count.

We'll be announcing the results in the coming weeks, so be sure to check back and see how your favourites fared.