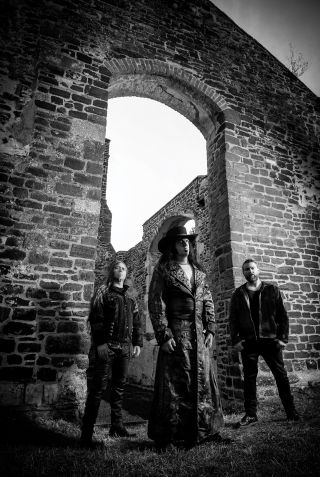 When Vltimas were announced to the world last October, fans of extreme metal could have been forgiven for tempering their excitement with trepidation. All three long-revered members – guitarist Rune ‘Blasphemer’ Eriksen (Earth Electric, Aura Noir and ex-Mayhem), vocalist David Vincent (on-off-on-off Morbid Angel) and drummer Flo Mounier (Cryptopsy) – have each been in part responsible for altering their respective death and black metal landscapes.

But they’ve also had a hand in albums whose unexpected turns have confounded and outraged their fanbases. Mayhem’s futuristically clinical millennial album, Grand Declaration Of War, Morbid Angel’s industrial retooling on 2011’s Illud Divinum Insanus and Cryptopsy’s lurch towards clean vocals and metalcore stylings on 2008’s The Unspoken King are all hugely divisive experiments to this day, but each showed a willingness to step outside of genre conventions.

The opening lines to VLTIMAS’s debut album, appropriately titled Something Wicked Marches In, do indeed suggest that surprises are afoot: ‘Ahhhhh we’re revealed / Ahhhhh for all to see / We contrarians / New level of sorcery.’

But while the album shows little concern for the kind of stylistic regression that has become a regular feature of supergroups, the unmistakeable presence that each of the members brings to bear has resulted in a rare, artistic symbiosis and a potent, imperious vision. Its endtimes-embracing thrust, brain-disassembling, alien-alloy riffs and spearhead-through-gristle vocals feel far more pressing than wondering where to file it stylistically.

“Death metal, black metal, I don’t really give a fuck about any of those terms,” says a chatty Rune from his adopted Portuguese home. “When you create, it needs to be as free as possible, and I wouldn’t like to pigeonhole anything. I don’t even know what to call this at this stage.

For me, it’s art, it’s my inner expression of how I feel. Also, when you have a vocalist such as David, and obviously a drummer such as Flo, you keep those things in mind as well when you are creating riffs. I think that aspect is probably the biggest contribution, in the sense of how everybody shaped the music.

I know both of their styles, and even though all the riffs come from me, I think that really shaped the way I was writing – at least more towards the end than obviously in the beginning.”

Originally Rune’s brainchild, Vltimas was at first little more than a collection of riffs held over from his time in Mayhem, their purpose unfulfilled. The band started to take shape when he collaborated with Flo while working with Nader Sadek, an Egyptian artist with a knack for bringing together the crème of the extreme metal world.

Discovering a musical chemistry together, the search was on for a vocalist who could embody the energy they’d created but whose force of personality could bring a new dimension to the project.

Steve Tucker, who’s alternated with David Vincent at the helm of Morbid Angel since 1997, was also part of Nader’s project. But having known David since his time in Mayhem, it was his strident approach to vocals and lyrics that brought Rune’s vision into full focus.

“As soon as Flo and I knew who the vocalist was going to be, it changed a lot,” says Rune. “So I threw out a lot of material. But the more we started to get under each other’s skin and learn not only each other’s behaviour, but also how we see this project, the music started to take shape accordingly.

"I threw a lot of riffs away, but some of the later riff sequences that I came up with at home, like the one for Monolilith, was a bombastic, big intro, and that’s something we were all looking for. It was something that we felt was appropriate to summarise the three of us.”

At that point, David had been out of Morbid Angel for three and a half years, the notoriously temperamental dynamics within the band having coming to a head in the wake of the response to the controversial Illud… David is wary about talking about the recent past, but ask him what VLTIMAS reawakened in him and, in his gentlemanly Southern drawl, he answers: “It’s given me a refreshing cohesion.

Obviously there was a geographical challenge [with David living in Texas and Flo in Montreal], there was a lot of blood sweat and tears that went into this, but when all three of us got together, it became as honest and organic as anything I’ve ever done.”

With Rune making regular trips to Texas, to flesh out musical ideas and to bond on the kind of personal level that allows albums such as Something Wicked… to harness such a unity of purpose, the band finally decamped to Orgone Studios in Woburn, home of Jaime Gomez Arellano, who’s hosted the likes of Myrkur, Sólstafir and Paradise Lost, as well as having remastered Grand Declaration Of War.

“Going into a studio in the middle of nowhere is beneficial to every band,” says Rune. “Every band should do that, just to escape the city noise, and then you might be able to hear yourself, you know? And I happen to love England, especially the countryside. There is some kind of pagan attraction. You’re also a bit out of your comfort zone, and I guess coming all the way over from Texas to the green hills of Woburn, it’s kind
of a game-changer.”

“All three of us are alphas,” says David of the chemistry they created there. “There’s no lack of skill set, there is no lack of accomplishment, all come to the table with quite a full palette and a full tool box. Each of us respects each other for that portion of the contribution of what it takes to make the whole.

"Humility is a plus. We all have egos, there is no question about that, but that’s OK. When you don’t turn that into a negative thing towards the other partners and you use that with them and you turn it towards your music, it’s a perfect wartime crack commando unit.”

Every aspect of Something Wicked Marches In – from the stunningly detailed, mind-warping artwork that Rune and David both agree needs vinyl dimensions to fully appreciate (see ‘Vision Accomplished’, right), to titles such as Total Destroy!, and the high-tensile hyper-kinetic battle vanguard that rampages throughout much of the album – testifies to a unified a force of will.

The added, thrill-seeking edge that makes the album more than the sum of its not inconsiderable parts, is the apocalyptic fervour that offers its main lyrical and sonic thrust. Rather than rail against mankind’s path to self-destruction, Vltimas sound like they’re siphoning a wellspring of turbulent energy you only find at the threshold of the endtimes. For David, the only approach is to embrace the inevitable.

“It’s coming, whether someone desires it or not. The choices that are made every day are predetermined and geared towards that, I’m just writing about it. So if the bomb went off tomorrow, I’d just lean into it. I’m entertained by the notion.

"When you’re an entertainer, you also enjoy being entertained, so it’s not a question of, ‘Do I think I’m going to change something?’ No. I’m simply, in my own artistic way, providing some feedback and some commentary. I know what’s coming, I might as well have some fun with it along the way.

“There was a time reportedly when dinosaurs were roaming the planet and they’re not here anymore other than fossils in museums. Maybe humanity will be the fossils in the museums for whatever takes over after we’re done.”

Something Wicked Marches In is out now via Season Of Mist and available here.