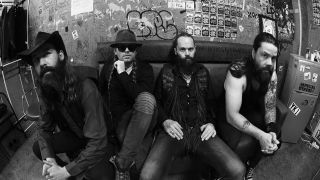 Since their beginnings as a genre-challenging black metal band, Iceland’s Sólstafir have stood apart from the crowd thanks to a unique artistic vision and a healthy disregard for convention. Happily, the world seems to have finally woken up to just what magic the group are really capable of, not least because the band have been on the road for much of the last few years taking their songs to the people and spreading the word via their hypnotic live shows. Now they are back in England as part of a rather tasty and eclectic touring package, so we spoke to guitarist and vocalist Aðalbjörn Tryggvason for a taster and to see how the band is doing after what has been a rather eventful year.

Hello again! You’ve been on the road for about a month and are now hitting the UK – tell us a bit about this tour.
“It’s a co-headline tour between us and Mono from Japan and [German prog metallers] The Ocean are also with us. I think it’s 28 dates and it’s been going really well – a slightly different crowd and packed out houses. We took Scandinavia and Russia, Eastern Europe, Southern Europe and Central Europe and now we’re heading toward England!”

It’s a really interesting combination of bands, how did this line-up come about?
“Well I knew Mono – the name and that they were a good band – but I never heard The Ocean before, so Mono kind of sold it to us. You know, we can tour with Primordial one tour and then Audrey Horne the next and then with a band like Mono. And that is great.”

You mention that the crowd has been a bit different?
“You can call this the ‘British doom metal’ syndrome and maybe we have some of that in us. You know, Paradise Lost tried to become Depeche Mode, Anathema almost became Coldplay (don’t get me wrong, I love those bands and know some of those lads personally) and we also started as a more extreme band and went somewhere else. Our first tour was with two black metal bands, so we are more used to hardcore metal guys at our shows and now it is twenty year old women.”

**As a band that came from metal/extreme metal and evolved outside of those boundaries, how do you relate to the scene today?
**“I’ve been a thirteen year old metalhead: I remember when [Darkthrone’s second album] A Blaze In The Northern Sky didn’t sound like [their debut] Soulside Journey and I felt betrayed by my favourite band. I hated Nick Holmes when Shades Of God came out ‘cause I loved [previous album] Gothic, so I can relate if someone doesn’t like the music any more. But I love those albums now. I think things have changed a bit today; you can like more diverse music. Twenty years ago you basically weren’t allowed to listen to any other music than black metal if you came from that world. We still have our metal fans but also more, I would say, ‘ordinary’ music fans. If you live in a heavy metal world it can be a bit limited. How often do you only want to play Bloodstock, Summer Breeze, Party San? You know, we’ve done that, but we don’t want to be limited and chained down to something.”

**Even with your first album you were pushing the boundaries of extreme metal and because your work is so individualistic, one could say that you’ve been slowly creating your own crowd and making your own scene rather than trying to fit in ever since that time.
**“I think we’ve never been confident talking about ‘our crowd’ – I think of bands like Metallica when I hear that – but obviously it’s become more diverse. There’s people I can rightfully call ‘our fans’, but myself for instance; I could be a Sólstafir fan; I buy the latest Darkthrone albums and I buy Nick Cave albums and I listen to Hell Awaits when I’m vacuuming at home. So I guess I would be the perfect Sólstafir fan.”

**How do you relate to the whole ‘post-metal’ tag that you are sometimes labelled with? Are you comfortable with that?
**“It’s funny, here we are with Mono and we are more like The Metal Band in this tour. We are far more of a metal band than the rest, but we are a ‘non-metal metal band’. People can call us post-rock, post-metal, I don’t give a fuck, I don’t think about that. But post-rock, shoegaze… those guys are quite like metal fans. They are really into it, they live for it, they just wear Converse instead of military boots. Same shit, man. I think at a certain point people will stop asking you what music you play. Like Sigur Rós or Nine Inch Nails; you don’t say, ‘What sort of music do you play?’ Nine Inch Nails is Nine Inch Nails, Sigur Rós is Sigur Rós.”

**With all this touring have you had a chance to start writing material for the next album yet?
**“We’ve got shit loads of material and ideas that I’ve been writing on piano – no new songs yet, but after this tour we’ve done 170 shows, and we’ve had four drummers this year, so we haven’t had much time to write new songs.”

**You mention that you’ve had to work with four drummers – does it still feel like sacking [original drummer] Gummi was the best move for the band?
**“Absolutely, it was either the band would die or we would get rid of him. We didn’t want the band to die, so to save it we had to do what we did and we haven’t regretted it for a single second. There were three options actually; break up the band, put everything on ice or let him go. But putting everything on ice is too risky, we are riding a certain wave and we didn’t know what would happen, would this be like Metallica, spending years in rehab? We know each other that well that we know what’s been going on behind the curtains, so this was the best idea. It saved the band, trust me.”

**Is it fair to say that clean living is a big part of the Sólstafir picture these days and is the band stronger for it?
**“Who have you been talking to? Ha ha. I’m sober now, two years. Half the band is sober. Things have never been better. It’s weird to say it since the four of us were in a band for so many years. We had a lot of tension and we dealt with that, but this time the band became contaminated, a poison was planted in the chemistry, the friendship, the trust. So yeah it was sad and the thing is, if you’ve been married 20 years or have been in a van and travelled the world then I’ll listen to what you have to say about it. If you’re a 12 year old and you never had that sort of relationship, you don’t really know. If you’re married 20 years and get a divorce there’s a reason, you don’t get a divorce just because you had one argument. It happens in every band but for some reason some people like showing dirty underwear, but that’s so stupid ‘cos all parties know everything about everyone’s dirty underwear, so its lose-lose. So we try and deal with this as professionally as possible, because certain parties think they own certain parts but now we’re dealing with lawyers. Unfortunately it came to that, it was the only solution. But the band has survived and is having a good time. You can’t put a price on good morale.”

Sólstafir play the Electric Ballroom in London on 6 November and Damnation Festival in Leeds on 7 November.