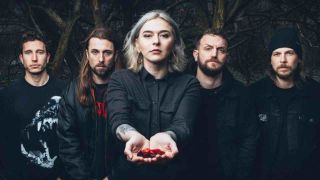 There’s a reason why Venom Prison have gotten so much love over the last few years, and that’s because they do 21st century death metal better than pretty every other new band out there.

Don’t believe it? Check out this absolutely lacerating new version of the title track from the Anglo-Russian band’s hard-to-get 2015 EP Defy The Tryant. Where the original was a fearsome slab of noise, this time around they’ve sharpened its fangs to a point where it’ll strip the flesh from your bones.

The song will appear on Venom Prison’s upcoming album Primeval, alongside re-recorded versions of eight other tracks from the band’s first two EPs, Defy The Tyrant and follow-up The Primal Chaos). It also features two brand new songs, Defiant To The Will of God, and Slayer of Holofernes.

“Primeval is a snapshot of the earlier days of Venom Prison, simpler times where we locked ourselves in a room for days on end to create the early incarnation of what would be our first collection of songs,” say the band. And who are we to argue?

Check out the video for Defy The Tyrant below. Primeval is out on October 9 available to pre-order now.

Primeval Track List:
1. Usurper of the Throne
2. Life Suffer
3. Mortal Abomination
4. Path of Exile
5. Defy The Tyrant
6. Babylon the Whore
7. Daemon Vulgaris
8. Narcotic
9. The Primal Chaos
10. Defiant to the Will of God
11. Slayer of Holofernes