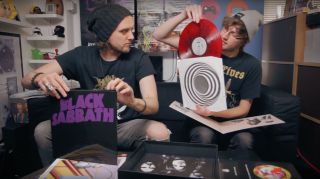 On September 29, Black Sabbath will release a massive vinyl box set, which has been dubbed the Ten Year War. Inside it contains special splatter vinyls of the first eight albums, rare 7-inch singles, reprints of tour programmes and much much more. If you love Sabbath, then you need this.

But there’s also a very rare version of the box set. So rare in fact that it has sold out already, but we managed to get our grubby little mitts on the limited edition Gold box set, released in partnership with the Metal Hammer Golden Gods.

To see what’s inside the mega box set, Metal Hammer Editor Merlin Alderslade and Online Editor Luke Morton had a big ol’ rummage through in the first of soon-to-be-many unboxing videos coming to Metal Hammer.