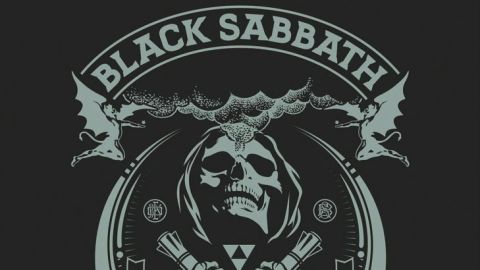 Upon disbanding reluctantly following their final live show in February, Black Sabbath, venerable harbingers of doom (and countless other incarnations of the heavy metal they initially conceptualized at the close of the 1960s and latterly came to define), received a veritable deluge of plaudits. “Pure heavy-metal mastery,” gushed Rolling Stone following the band’s valedictory home-town show. Telegraph and Evening Standard reviewers both rated earlier nights on The End tour as four-star triumphs, while the Guardian gave a maximum five-star rave to the Sabs’ “blitzkrieg of hard rock”. But it wasn’t always thus.

It’s no exaggeration to say that while Black Sabbath were producing their finest, most influential work in the early to mid-1970s, the contemporary rock press and broader musical milieu’s self-appointed ‘intelligentsia’ utterly loathed them. From Lester Bangs sniffily dismissing their self-titled debut in Rolling Stone as ‘discordant jams’ forward, Black Sabbath were relentlessly scorned. Scant months after they delivered Sabotage, their artistic high-water mark, the heavens opened and proceeded to storm down upon John Peel, DJ-ing at an Essex open-air show. “Don’t worry,” Peely droned, apparently charmingly, from the stage, “I brought some Black Sabbath albums along to protect my records from the rain.”

It was classic withering Peel, yet few laughed. These self-same Sabbath albums, so readily dismissed by the rarified, velvet-looned elite of the hip media, sold in their millions. Black Sabbath were a people’s band; not pop, but certainly populist. Metropolitan glam-era tastemakers with soft voices and even softer hands might have regarded Ozzy and his Sabs as the barbarians at the gate, but the factory fodder packing out the Odeons and surrendering to the riff, gazed up at a stage full of Osbourne, Iommi, Butler and Ward and saw only their own.

Sabbath were homegrown Stooges, riff-monsters from an industrial heartland; they were everything the coming press-darling punk horde purported to be, but in a break with what accepted elitist rock press protocol demanded, they not only sold an awful lot of records, but also sold them without the blessing of the inkies.

Result: blanket critical condemnation and hatred. In many ways it was this sustained press derision that created the fierce loyalty that defines the metal community to this day, and no metal band faced more of it than Sabbath.

Ultimately, though, Sabbath didn’t need the press, because their recordings recalibrated all existing expectations of just how primal, powerful, hard and heavy rock could be. Inspired by the then current mode for diabolic Dennis Wheatley horror, they set about accentuating the evil inherent in ‘the devil’s music’, located the tritone, showcased it in their eponymous debut’s eponymous theme tune and never looked back.

The Ten Year War, meanwhile, comprises Sabbath’s first eight albums, originally released between 1970 and ’78 and representing what’s arguably the band’s finest work. Available across eight remastered splatter-vinyl 12-inch discs and a couple of rare seven-inch single reproductions, with a hardback book and a reprinted ’78 tour programme and ’72 poster, it also comes complete with (brace yourself) a crucifix-shaped USB with the eight albums presented in hi-def MQA audio, that you can wear around your neck, just like Tony Iommi would.

Whack the USB stick in your slot, bung on your headphones and prepare to be amazed. Crisp, powerful, downright malicious, Sabbath’s familiar sonic immensity snaps into sharp focus from within the murk of accepted technical limitations, gets mercilessly medieval on your ears, and it’s only a joy. Ozzy’s extraordinary soul-in-torment vocal, Iommi’s crushing, insistent, characteristically metallic riffing, Geezer Butler’s pendulouslyballsy bass and Bill Ward’s thunderously colossal drum assault lock together like a well-oiled machine. And on the occasions they get it just right – Black Sabbath and Paranoid’s career-defining 1970 title tracks; Master Of Reality’s Children Of The Grave (’71); Vol. 4’s Tomorrow’s Dream (’72); Sabbath Bloody Sabbath’s glorious schizophrenia (’73); pretty much all of Sabotage (’75), there’s really no one better.

When considering The Ten Year War’s contents back-to-back, the sudden drop in quality when you slam into the buffers of Technical Ecstasy and Never Say Die is undeniably apparent. Recorded in ’76 and ’78 respectively, they’re not terrible, but in this esteemed company fetch up short. Whatever, the astonishing quality of Sabbath’s first six albums more than offsets any minor criticisms one might have of their latter work, and The Ten Year War offers irrefutable proof that not only were Sabbath metal’s first exponents, but for five years straight they were also its best.