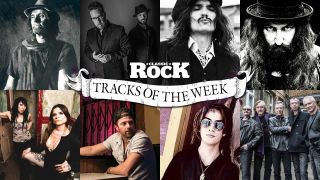 Every week we’re gobsmacked at how much new music comes our way, from established acts and total unknowns alike. So the process of combing through it all is challenging but hugely satisfying, and always reaps some brilliant surprises. Last week you voted in your droves, and put the following bands into your top three:

Congratulations Danny Vaughn! And well played to The New Roses and London Ghost, for highly commendable second and third place tracks. So, who will you choose this week? Quite frankly we don’t envy you: it’s a killer line-up you’ve got to pick from, so prepare for some tough decision-making and don’t forget to vote for your favourite at the foot of this page.

But first, a spin of last week’s champions...

Having bounced back post-Motorhead with his Bastard Sons project, Campbell returns this time with an all-new solo album. It’s stuffed with appearances from his famous friends, three of which feature on this heavy, catchy bullseye of a first single. These old boots, it seems, are made for walking, but mostly for good old fashioned rocking.

Super tasty new tune from Indiana duo The Cold Stares, with a cocksure earworm of a guitar hook. If you appreciate the bluesy, raw rock’n’roll of The Record Company and The Black Keys – but generally like your rock a little harder – you’ll love this. There’s more to come from them, too, so watch this space...

The Darkness - Rock And Roll Deserves To Die

The Darkness aren’t fucking around with this one... Well, maybe just a little bit (watch the video and see), but you’ve got to admire the ambition and balls at work on this highlight from Easter Is Cancelled. An almost proggy gunpowder blast of Queen-meets-Judas Priest excess, it’s the sound of a band genuinely pushing themselves. ‘Go hard or go home,’ they’ve seemingly said to themselves, before opting for the former.

A longtime staple of the London blues scene, Jack J Hutchinson has taken a heavier, rockier turn on his latest album, Who Feeds The Wolf – from which this upbeat yet brooding new number is taken. Part Paranoid-esque chug, part smokey grunge, plus hatfuls of Hutchinson’s own southern-flavoured hoodoo.

The New York alt metal/rock stalwarts are back, boasting hearty Alice In Chains vibes and skull-thumping guitars. “By far, this is the best Life of Agony record you’ve heard in years,” says guitarist Joey Z, of upcoming LP The Sound Of Scars. Based on this first taste he could well be right...

Nashville-based singer/songwriter/guitar man Kip is back with this dulcet first cut from his upcoming album. For all his modern country associations there’s far more in the way of classic heartland action here, picking up from the Springsteen, Seger, Cougar Mellencamp and other influences of previous record Slowheart.

The Who have a new studio album on the way, but for now we’re enjoying this slick, spirited take on one of their earlier gems (and the track that would leave Pete Townshend forever disenchanted by the singles market). Singer/guitar star Jacob Reese Thornton remains one to watch...

Thunder - Your Time Is Gonna Come

We’ll leave you today with Thunder’s elegant, loving cover of the Led Zeppelin classic – available as part of their forthcoming retrospective collection. Danny and Luke’s love for Zep is palpable, but not so much that they succumb to carbon-copy replication. Nice.

Have a good week y’all!